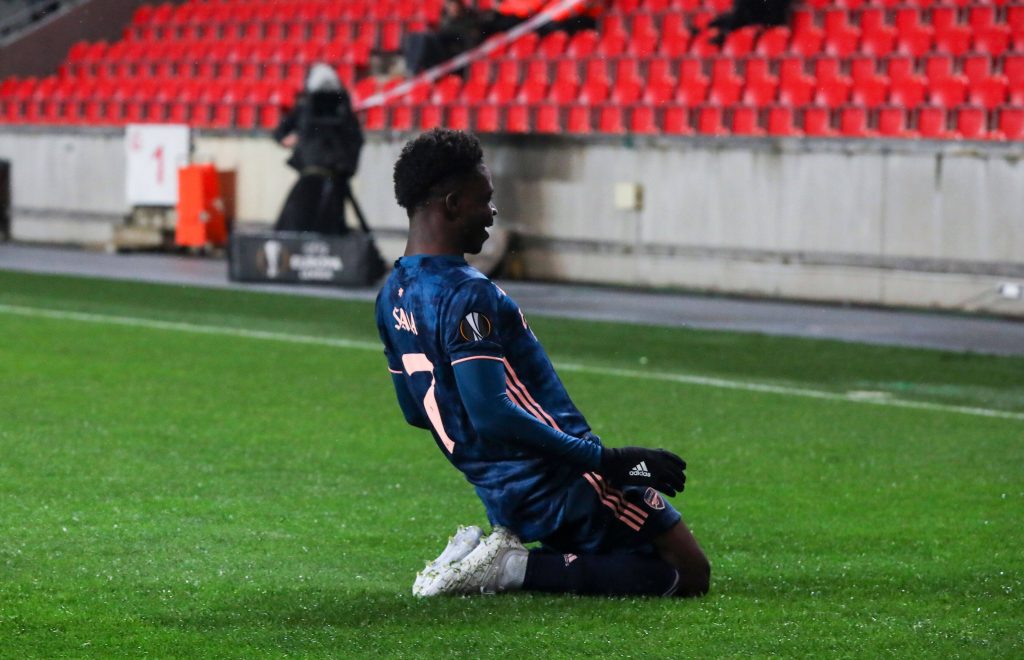 The Gunners were held to a 1-1 draw in the first leg of their quarter-final tie, and they needed to score at least once in Prague to stay in the competition.

Saka was poor with his finishing at the Emirates Stadium last week but made amends with an impressive all-round attacking display for the Gunners.

His curled shot in the 15th minute was impressively saved by the goalkeeper, but he won the penalty for the club’s second goal a few minutes later.

Saka made it 3-0 in the 24th minute with a clever finish at the near post, which caught the keeper wrong-footed as he was anticipating a shot towards the opposite upright.

Meanwhile, Smith Rowe was denied a goal for offside by VAR but put the disappointment to bed by assisting Nicolas Pepe’s opener after 18 minutes.

The 20-year-old showed terrific composure in the box with several defenders around him before laying the pass for Pepe to find the back of the net.

The Hale End graduates were hugely impressive with their link-up play on the counter-attack, and Arteta reserved special praise for the duo.

He told Arsenal.com: “For me, it’s a joy to watch them play and to watch them every day in training. How they behave, the passion and the commitment they have for the club and how much they love to play football.

“You have to let them express themselves, and you have to give them certain room to work and some ideas of how they can exploit their qualities. Then it’s up to them. I thought both of them were really good today.”

The Gunners will take on Villarreal, managed by former boss Unai Emery, in the last four of the competition. Should they progress, they will face either Manchester United or Roma in the final in Gdansk next month.

Their immediate focus will shift to the Premier League clash against Fulham on Sunday. The club are nine points adrift of a potential European place. They will be aiming for back-to-back league wins for the first time since January.