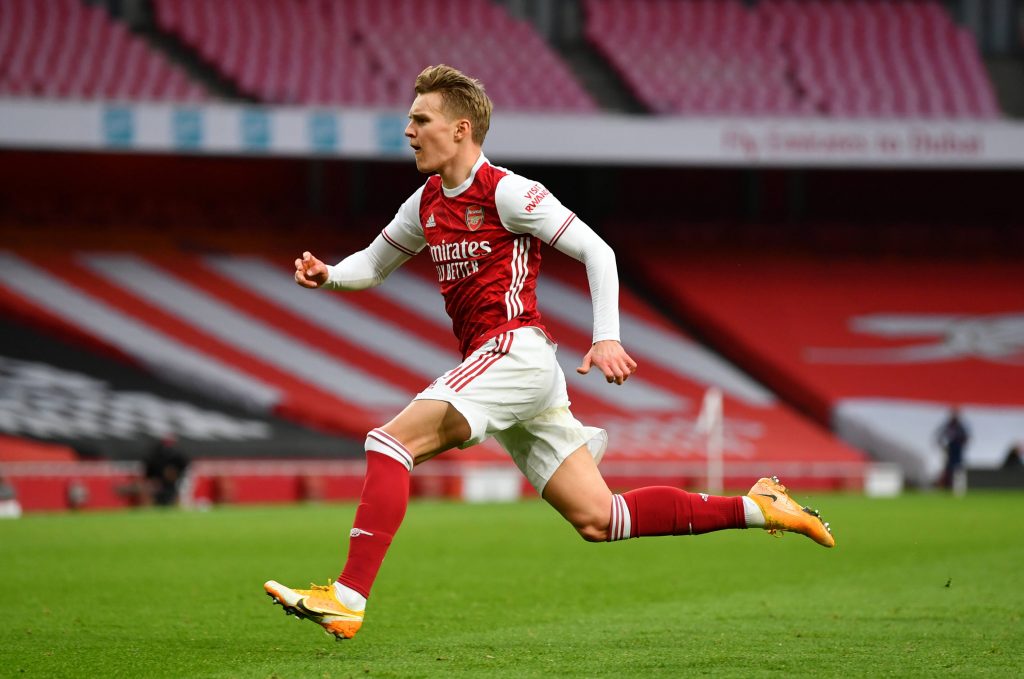 Martin Odegaard has only been at the club for just over 50 days, but he is certainly making his mark in Arsenal colours.

Before the January transfer window, the Gunners were struggling to create chances and score goals from midfield.

Their attack looked threatening, but they required some support from behind, especially from the No.10 position.

Despite youngster Emile Smith Rowe being handed the opportunity to solve these issues, it soon became clear that more experience and depth was needed.

A couple of months later, it is a completely different story and that is thanks to one man – Odegaard.

He may only have two goals and zero assists in 12 appearances, but Odegaard’s displays have left many supporters urging the club to sign him permanently this summer.

The Norwegian’s ability to pass and dribble in small spaces, along with his work ethic, vision and eye for goal, has had a significantly positive impact on Arsenal’s performances in the last few weeks.

One of those impressed with the 22-year-old is Arteta, who publicly praised him after Arsenal’s 3-3 draw against West Ham United in the Premier League on Sunday.

“I think he had an incredible performance – he was very intelligent the way he read the game, the way he affected the game, and again he showed how much he wants to win,” Arteta said (via Arsenal.com).

“When everyone was a little bit trembling, he gave us that composure on the ball – and he created chance after chance.

“I love talented and creative players that all the time are willing to take that ball and make things happen, that are mobile and also hard-working. He is one of them.

“We have some others with different qualities, but it’s true that Martin is now giving us a different level on certain things that we didn’t have.”

Once the match had concluded, Calum Chambers, Kieran Tierney, Alexandre Lacazette and Odegaard were all put up as nominees for Man of The Match on the club’s official Twitter account.

Odegaard won it comfortably, with 62% of the 60,000 people voting for him. It’s safe to say he’s become a real fan favourite!

Odegaard is the type of player Arsenal have been screaming out for ever since Mesut Ozil’s career went downhill.

Every time he picks up the ball, you get a real sense that he will do something positive and cause problems for the opposition.

His work rate is also very impressive – he gets himself all over the pitch and always gives 110% – something Arteta wants from every player.

The manager loves working with him, as do his teammates. Odegaard’s addition to the squad has so far proven to be a brilliant bit of business by Technical Director Edu Gaspar.

However, now comes the real challenge – convincing both the player and Real Madrid that the best place for him is north London.

Arsenal must do absolutely everything to keep him at the club, even if it’s for another season-long loan. The fact that he is in tremendous form and is enjoying his time in the Premier League will no doubt increase the chances of him staying at the Emirates Stadium.

If Arsenal seriously want to improve as a team and compete against the very best, recruiting players such as Odegaard must become the norm. The difference he has made is clear for everyone to see.