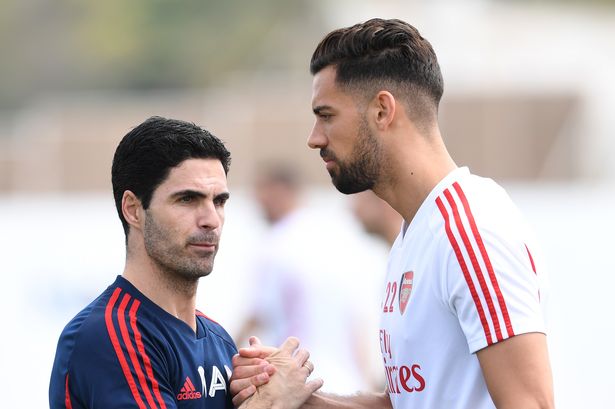 Pablo Mari has said that he would follow Arsenal manager Mikel Arteta to the end of the world, according to Spanish media outlet EFE.

The Spanish defender has provided his complete backing to the Gunners boss who has come under increasing pressure due to the club’s recent results. The North London club have made their worst ever start to a Premier League season and find themselves 15th in the table after having played 11 games.

There are many who are questioning whether Arteta is out of his depth at Arsenal. Fans who are keen to see him lose his job argue that while he was able to stabilise the Gunners last season and lead them to FA Cup glory, he is unable to fix their problems in attack. They argue that while results have been dire,  performances have almost been worse and this is exactly what led to his predecessor Unai Emery losing his job last year.

Despite these doubts, reports suggest that Arteta’s job at Arsenal is secure. It is understood that he retains the full support of the hierarchy at the club as well as the players. On Arteta, Mari said:

“When you sign a coach, it is because he has given you the confidence that his idea of ​​football is the one that you think is best for your club. If you don’t give it time for that idea to evolve, you aren’t giving it a chance. When you want to change a dynamic or a mentality of a club, it is difficult to do it in a month.”

“About Mikel, I think the idea of ​​the club has changed. The attitude, the mentality has changed. He has brought a very interesting long-term project in which I feel like a participant because I signed because I liked it a lot.”

“I go with Mikel until the end of the world. He just needs time. Soccer is not always rosy. I am happy because, despite the situation, we are united.”

The Gunners have scored just 10 goals in their first 11 league games. They are fourth from the bottom in terms of shots taken in the Premier League this season. Regarding their lack of goals and how to get them back on track, Mari said:

“It is the million-dollar question. Everyone in the club is thinking about what is happening to us. In the dressing room, we give 100% in every game, in every training session, to reverse this situation. But I think that within all this, football is streaks and I believe a lot in this kind of thing.”

“As much as you want to score ten goals each game, there will be times when you can’t score any. We are in that dynamic right now, no matter how hard you try, football is not giving you everything that you give it. It is a matter of changing it.”

For Arsenal to rescue a season that looks in danger of being consigned to failure before the turn of the year, Arteta, his coaching staff and the players must solve their problems in front of goal. They have one of the worst attacking units in the league but rank in the top five for least goals conceded in the current campaign. The manager deserves credit for making a side that has been consistently criticised for their defensive shortcomings in the past few years more resolute at the back.

If he can fix their problems in attack, the results will take care of themselves. The question is, can he find the solutions internally or will he rely on the club to recruit one or two players who can change the dynamic of the side when in possession? Based on what we have seen this season, the latter seems more likely.

With Christian Eriksen, Emi Buendia and Dominik Szoboszlai seemingly available in the upcoming transfer window, the Arsenal board must back their manager so that he can be given a fair chance to get their season back on track. If we don’t see progress even after that, then it would be fair for serious questions to be asked of Arteta.