As many of you might already know Mano Menezes is Brazil’s new manager. Menezes may not be an internationally known coach such as Luis Felipe Scolari or Carlos Alberto Parreira or even Wanderley Luxemburgo. He was actually not even CBF’s first choice but one thing is for sure: He’s much more of a coach than Dunga was.

Mano Menezes is probably one of the best Brazilian managers in the last ten years. He became nationally known after bringing Gremio back to the top flight of Brazilian football in 2005 and in 2008 he took over Corinthians also with the responsibility of bringing the club back to the first division. He accomplished that and also won a regional title and a Brazilian Cup with the club from São Paulo state.

CBF’s President Ricardo Teixeira initially invited Fluminense’s manager Muricy Ramalho to lead the National Squad but Fluminense didn’t allow Ramalho to breach his contract and Mano Menezes became the next best choice. (On a side note: Fluminense is a long time Adidas sponsored club and Corinthians is the biggest Nike representative in Brazil… I’m not implying anything, I’m just saying)

Now the question is not about Menezes capabilities as a manager but if he can endure four years of pressure rebuilding a team that counts on 190 million very demanding “coaches” (and that includes the frequently unhelpful and never satisfied press).

On August 10 Mano Menezes will have his first challenge as Brazil’s new manager when the team travels to New Jersey for a friendly against the United States. In fact Mano’s challenge already started this morning when he had to pick the players who will wear the yellow jersey.

A few things that some of you will notice on the list is the lack of well-known names. When you read this article the list might have been released already and I’m guessing Robinho and Roberto Carlos are the most notorious names there.

Robinho for obvious reasons. He has been consistent and an important piece (arguably the most important) for the national side in the past four years.

Roberto Carlos because he’s been performing quite well for Corinthians at the top of his 37 years of age. Besides there are not a lot of options for players playing in the country for the left side of the defense. 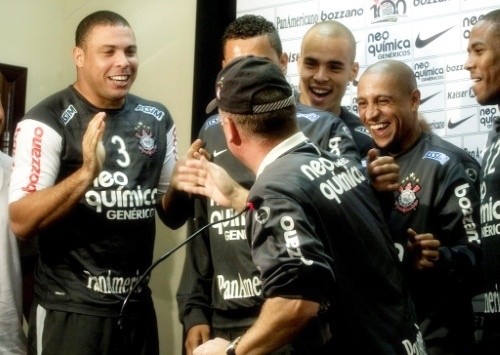 The best part of this team however, is that we might finally be able to see Neymar and Paulo Henrique Ganso playing for Brazil’s senior national team. These two players – along with Ronaldinho – were the ones that the fans and the press wanted on Dunga’s squad. So let’s see what they will present us.

Mano Menezes is a top quality coach. There’s no doubt about it. But he has a long bumpy road ahead of him. Copa America in Argentina next year, Olympic Games in London in 2012 (Brazil’s only missing title), and then the preparations for the biggest and most important World Cup in Brazilian Football EVER!

It’s now in Mano Menezes’ hands the challenge of erasing not only the failures of 2006 and 2010 but the 1950 disaster. I am not joking when I say that it would change the face of football in Brazil if the team doesn’t claim the 2014 World Cup. But I’m sure there will be a lot of external forces making sure the show goes as scripted and expected. And that’s a hot topic for another day.