The most-anticipated tie of this year’s FA Cup quarter-final has been saved for Monday night football as Manchester United host Arsenal for a place at Wembley Stadium.

Both manager’s are under similar pressures – an expectancy to finish in the top four this season and the want of some silverware from their fans. Arsenal are the defending champions, whilst United have not lifted this trophy since 2004.

Louis van Gaal’s side are in better shape of the two with Arsène Wenger having his usual long list of casualties.

Robin van Persie will miss this evening’s match out with an injury. Van Gaal played Wayne Rooney as a sole striker in their last match as a result.

Jonny Evans starts the first of his six-match ban for spitting at Newcastle’s Papiss Cissé.

Gabriel Paulista is out with a hamstring injury, joining Mathieu Debuchy as defenders unavailable to Wenger for this match. 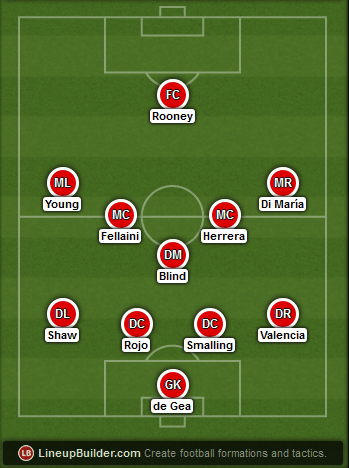 Luke Shaw has been back in training over the weekend so could go back into defence with Marcos Rojo slotting back to his centre-back role. Chris Smalling has started ahead of Phil Jones for the past couple of games. This is the five-man midfield that started versus Newcastle to support sole striker Wayne Rooney. 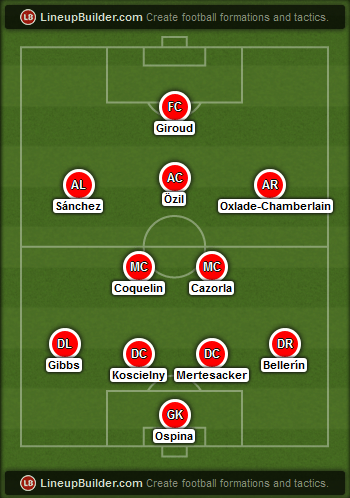 Arsenal’s centre-backs pick themselves due to Gabriel Paulista’s injury. Nacho Monreal could come in for Kieran Gibbs at left-back but Héctor Bellerín’s pace will surely be used to counter Ashley Young’s. Alexis Sánchez has a favourable match up if Antonio Valencia and Ángel Di María are defending his side. Olivier Giroud should fancy himself to get some chances versus a defence that hasn’t been all that stable this season.

Alexis Sánchez vs Antonio Valencia
Alexis Sánchez got back to scoring ways last time out and should have the beating of right winger-come-right-back Antonio Valencia in this match. Inside of the Ecuadorian is Chris Smalling whose positioning isn’t always great, could see the Arsenal forward find space. He’ll have plenty of support in attacking to create goalscoring chances for with Giroud, Santi Cazorla, Mesut Özil and whomever starts on the right wing.

Wayne Rooney vs Per Mertesacker
The slow German defender was recently dropped by Arsène Wenger after a poor showing versus Monaco in the UEFA Champions League. The French manager doesn’t have that option this evening with Gabriel Paulista out injured. Manchester United should be looking to take advantage of this, both on any counter-attack opportunities, and in open play. He’s not the quickest and his positioning has been off recently – Wayne Rooney has been getting in great positions of late but his supply has been poor.

Santi Cazorla vs Daley Blind
Both sides have match winners in the centre of the pitch but Santi Cazorla has been controlling games more than any of these players of late. The Spaniard can dictate the tempo from the centre of the pitch, spray out passes to both wings and through balls to his striker. He’s a goalscoring threat himself. Daley Blind isn’t the quickest of holding midfielders, whilst Marouane Fellaini can be clumsy. It’s a good match up for Arsenal this and they should be looking to Cazorla to be involved in the goals at Old Trafford.

Prediction: Manchester United 1-2 Arsenal
We think their good be a slow, defensive start to this game as both sides feel each other out. Ultimately though we think both sides have better attacking units than they do defensive, so we’re expecting goals. Neither team have been playing great of late, and whilst Manchester United have had Arsenal’s number in recent seasons, we’re leaning towards the Gunners to pull one out the bag this evening.