A fixture that could have an impact on the battle for third position is the main Premier League game on Sunday as rivals Manchester United host Arsenal.

The Gunners are two points above United and three behind Manchester City, with a game in hand on both. However, they realistically need City to drop points in either of their final two matches to be within a chance of finishing second, as their goal difference is nine inferior.

Louis van Gaal’s side wrapped up fourth place with a win at Crystal Palace last weekend and will be keen to take another three points this Sunday to send a message to their fellow top four and title contenders ahead of next season. The top betting sites can’t decide between the two sides, although given Arsenal’s surge in form, they would be expecting to get something out of this game ahead of a United side that may have gone off the boil after securing a Champions League spot.

Marcos Rojo is unlikely to return this weekend. The Argentine centre-back has missed the past four games with an abdominal injury. Luke Shaw came off after 39 minutes last weekend but should be ready to start this game. On the opposite flank, Rafael is out for the season.

Michael Carrick’s season is done – Daley Blind sat in front of the back four last weekend but did not put his stamp on the game.

Wayne Rooney picked up a leg injury that saw him replaced after 45 minutes at Selhurst Park, whilst Robin van Persie was ill. Both should be in contention to face the Gunners.

Mathieu Debuchy has been out with a hamstring injury over the past few weeks.

Mikel Arteta could make his long-awaited return having been back in full training for the past couple of weeks now. Alex Oxlade-Chamberlain is out though.

Arsène Wenger has confirmed Danny Welbeck is available. The England international did not make the squad in Monday’s loss at home to Swansea City. 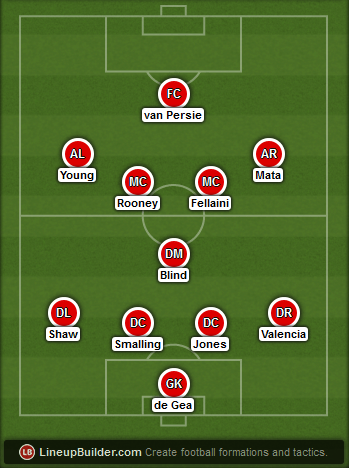 Phil Jones returned to partner Chris Smalling again last weekend. They will remain the centre-back pairing again this weekend. Luke Shaw should be fit to play at left-back and Antonio Valencia is one of the first names on the teamsheet. Daley Blind could be a player for the visitors to exploit in the holding midfield role. We think Wayne Rooney has to play centre midfield to give the side the energy and combativeness there, alongside Marouane Fellaini. That would likely see Robin van Persie play his former side again. Juan Mata down the right has to be a good weapon for United, whilst Ashley Young is playing well down the left. 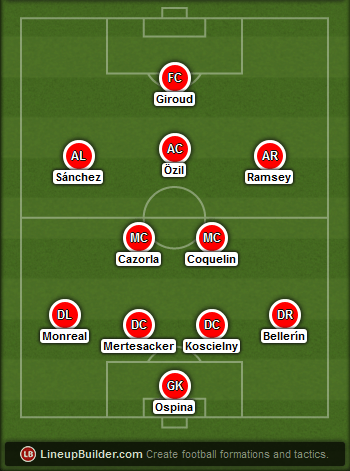 Arsène Wenger has used the same team for five consecutive matches now. David Ospina will remain in goal and we don’t see any changes being made to the back four either. Jack Wilshere came off the bench last weekend and looked lively so he could have given his manager a reason to play him alongside Francis Coquelin and push Santi Cazorla forward. But we think it will be the same eleven again, with Aaron Ramsey continuing on the right.

Alexis Sánchez vs Antonio Valencia
Alexis Sánchez was very influential in the game between these two at the Emirates earlier in the season but didn’t get amongst the goals as his side lost 2-1. United played a back three and wingbacks that day – the change of formation for this weekend’s game could work in the Chilean’s favour. Antonio Valencia should have problems when Sánchez runs at him and we see the Arsenal forward getting involved in the goals this time, whether it be on the scoresheet, or with an assist.

Mesut Özil vs Daley Blind
We’re not convinced the holding midfield role is best for Daley Blind in the Premier League. He doesn’t control the game there like Michael Carrick does, nor does the Dutch international take the game by the scruff of the neck. With that said, Mesut Özil and Santi Cazorla can look to dictate the game from the centre, although Blind will be helped out by Wayne Rooney getting back to defend, and Marouane Fellaini’s physical presence. Throw Francis Coquelin in the mix and it all makes for an exciting matchup.

Juan Mata vs Nacho Monreal
The United playmaker hasn’t put in too many noticeable performances in recent weeks but we’ll see if he’s up for the big game this weekend. Juan Mata has a good matchup versus a fellow Spaniard in that Nacho Monreal isn’t the best of defenders. United should see some supply from the right as a result. Mata can whip balls in from deep on his left foot if Monreal doesn’t stick tight to him, as well as cutting in field to get some shots in on goal himself.

3 – Robin van Persie has scored in this fixture at Old Trafford in each of the previous three seasons – twice for Manchester United and once as an Arsenal player.

11 – Arsenal have scored only 11 goals in their previous 22 Premier League meetings at Old Trafford, failing to score on 12 occasions. The only time they’ve scored more than once in a single away game versus Manchester United in the Premier League came in the 8-2 defeat back in August 2011.

82% – Manchester United have won nine of the last 11 meetings between these two at Old Trafford (D1, L1).