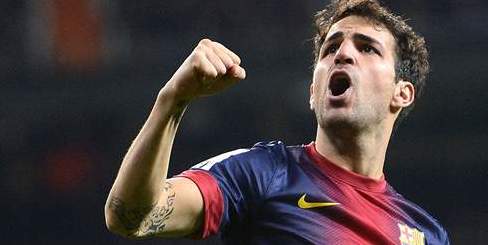 United had lodged a formal bid last Monday, only to be knocked back. Manager David Moyes has confirmed in a press conference at Yokohama that a second offer has been lodged for the former Arsenal skipper.

Moyes accepts the fact that at some point of time they may back-off from this deal, but the Scot wants to ensure that the club gives his best shot to make the deal happen. He said while speaking to the reporters:

“I think a point does come. But when you are interested in good players you want to give it every opportunity to materialize.

“I will hope things will continue to move forward.”

Manchester United’s Executive vice-chairman Ed Woodward had returned to UK last Wednesday to deal with some urgent transfer businesses and Moyes insisted that they are working hard to make this deal happen.

Fabregas has reiterated time and again this season that he prefers to stay at the Catalan club and fight for his place. Barcelona are also thought to be unwilling to sell their star midfielder, having already sold two of their star players in the transfer window – David Villa and Thiago Alcantara.

Meanwhile, United maintain their stance that Wayne Rooney would not be sold in the summer, though it is understood that the relationship between the player and the club hierarchies are increasingly reaching the stage, where it can go beyond repair.

Chelsea had lodged an opening bid for the 27-year-old, but was rejected immediately. According to reports from The Telegraph, the Blues are pondering to make a £40 million bid, much higher than the previous £25 million offer, for the England international.

United have also registered their interest in Gareth Bale and are ready to throw £60 million for the Welshman, but Tottenham are unwilling to sell their prized asset. Also the general consensus within the media and the player’s camp is that if Bale leaves, his preferred destination is likely to be Real Madrid.