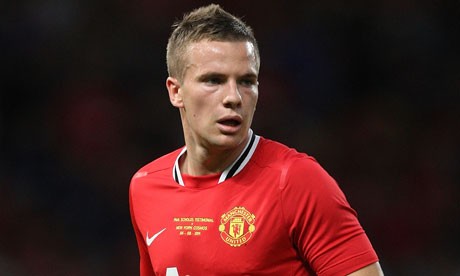 Manchester United midfielder Tom Cleverley has revealed that he is enjoying himself at his loan spell at Aston Villa, and will consider leaving Old Trafford if an offer is made in the summer. His contract with United will run out on June 30. The Englishman has been at Villa Park since September, and has been at the forefront of their revival under Tim Sherwood.

Cleverley has scored 3 goals since his move, including the winner on Saturday against West Ham United. After looking sure-shot candidates for relegation, Villa have turned their season around after Sherwood joined in February. Each one of Cleverley’s goals has come during the current manager’s tenure, and have pushed the Villans up to 14th.

‘I’ve really got to like playing for this club in the last few months,’ Cleverley said. ‘This manager, you have to give him credit for getting me where I am over the last few weeks.

‘I feel like I’m playing in my best position, confidence is high. Not only among myself but also among the team. All those factors help. I’m happy and playing with a smile on my face.

‘First the club have got to offer me something. And then I’ll definitely have a look.’

The 25 year-old was billed as the ‘next Paul Scholes’ when he burst onto the scene at United in 2009. But after failing to establish himself as a regular and getting a lot of criticism from his own fans for his inconsistent performances, he was offloaded by Louis Van Gaal. Everton and Villa were in the market to sign him on a permanent deal, but could not meet his wage demands. Now though, it looks like money will not be the primary motive in Cleverley’s next move.

‘I don’t think any Premier League players are going to be short of a quid or two,’ he said. ‘You have just got to be happy first of all. And I am at this club.

‘I just know my contract runs out at Man United on June 30, that’s my position.’

Cleverley was touted as a future star for United and the English national team, but it now looks like he is set to have a career at a mid-table club. But as long as he is playing week-in, week-out and influencing games like he currently is, he won’t be complaining.