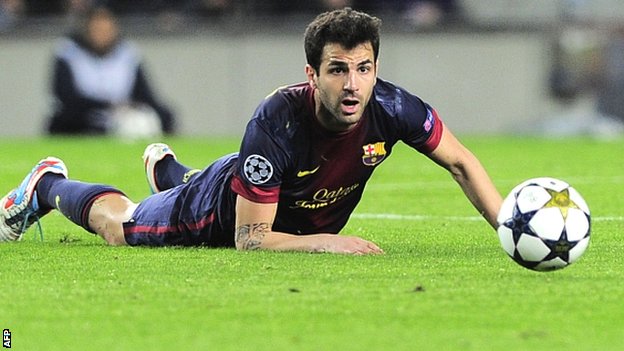 Manchester United saw their £26million bid for Barcelona star Cesc Fabregas rejected last week, and the fans of their fiercest rivals also laughed it off. This week however, things have changed. United have been given a glimmer of hope in the pursuit of their #1 transfer target.

Newly promoted Vice Chairman Ed Woodward, flew back home to Manchester to attend to ‘urgent transfer business’ last week. This was thought to be bid to push a deal through for the 26-year old midfielder; which started with a second bid of £30million plus various add-ons.

United’s first confidence booster came when that bid, which was made on Saturday, wasn’t immediately rejected by the Catalan side. This suggests that the La Liga champions are seriously considering selling him – probably in a bid to reduce the wage bill after spending big on Neymar.

Next came another lifeline from the man himself. He confirmed that he’d be open to a move if Barca were to accept any offer for him, as it shows that the club doesn’t value him as much as he’d like. With enough money for him and his agent, he may be persuaded into a move.

Gerardo Martino has now been named the new Barcelona boss, and according to various reports, the Spanish giants are willing to let Fabregas go if he wants to. Ultimately the decision lies in the hands of the player.

Another complication in this transfer saga comes in the form of Arsenal. The Gunners apparently have first refusal on their former star, and Fabregas left North London on good terms. The chances are that he’d certainly find it hard to turn a move back there down. The only problem would be the trophy situation, as they haven’t won any major silverware since 2005. This is where Manchester United have the edge – he’s guaranteed to be challenging for the title year-in year-out whilst at Old Trafford, whereas at Arsenal he could find himself challenging for fourth place.

In a World Cup year the best players have to be playing on a regular basis. If Barcelona cannot offer him that, surely a move would be in his best interests?

Where will he end up? Only time will tell.