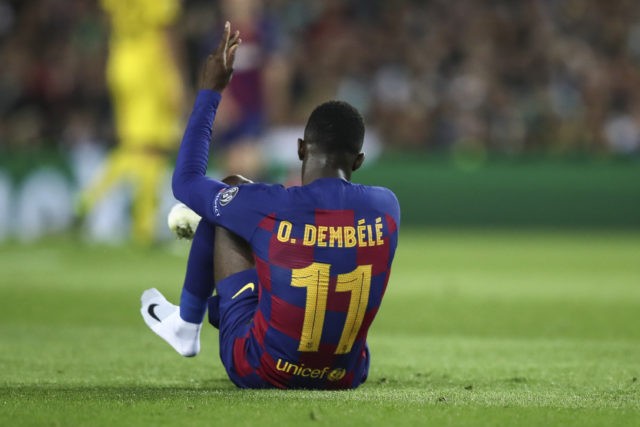 Manchester United and Arsenal are monitoring the situation of Barcelona winger Ousmane Dembele ahead of possible bids to land his signature during the summer, Sport claims.

Dembele has endured a frustrating career with the Blaugrana since his move from Borussia Dortmund in 2017 and he has been restricted to only 74 appearances in all competitions.

This has largely been due to his hamstring injury concerns and he has already missed 80 games for the Spanish champions over the past two-and-a-half years.

As a result, the Catalan giants are considering his departure and Sport reports that both United and Arsenal hold an interest in the former Rennes graduate.

However, the Premier League duo are expected to assess Dembele’s current injury condition and they are keen to know whether they can find a solution for the Frenchman’s muscular problems.

The Blaugrana are open to sanctioning Dembele’s sale during the summer but it is reported that they could also accept an initial loan agreement with the option to buy at the end of the campaign.

Despite the regular injury setbacks, Dembele has still made an impressive contribution for the La Liga holders with 19 goals and 17 assists from 74 outings.

Both Arsenal and United are likely to reinforce their attacking options for next season but the latter could have the advantage in the race to sign the France international.

As per Sport, the 22-year-old is said to have recently spoken with compatriot Anthony Martial in order to find out ‘what it means to play for Manchester United’.

Dembele, who is valued at £50m, has just over two years remaining on his Barcelona contract. He can play anywhere across the attack but has been restricted to a wide attacking role at the Camp Nou.