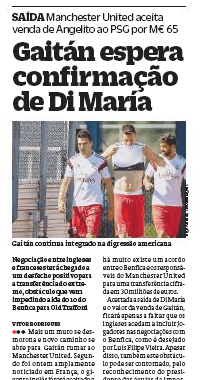 Recent reports suggest that Di Maria is all set to leave United this summer and could be unveiled as a PSG player soon. The former Real Madrid man has struggled to fit in at Old Trafford as well as England and is looking for a way out.

It is believed that PSG will be paying 45 million pounds for the Argentine, who is expected to complete is move soon.

Manchester United have used the opportunity to move for Nicolas Gaitan. The Benfica man has been linked with a United move for the last few years and it seems the saga might finally come to an end.

Gaitan is an underwhelming replacement for Di maria in all honesty, but it is perhaps wise to offload an unhappy player on mega wages. At the end of the day it is all about achieving the perfect balance in a squad.

Whether Gaitan can help United achieve that balance, remains to be seen, but he would certainly be an upgrade on the likes of young and Valencia.