The Premier League champions and the FA Cup winners go head-to-head to kick-off their 2014-15 season with the FA Community Shield on Sunday.

Manchester City were crowned 2013-14 Premier League champions on the final day of the season with a comfortable 2-0 against West Ham at the Etihad.

Arsenal weren’t so comfortable in their FA Cup final, coming from 2-0 down to see off Hull City 3-2 in extra-time. Aaron Ramsey scoring the winning goal. The Welsh midfielder was dearly missed through injury for a large part of the season.

The Gunners were worthy cup winners having eliminated Tottenham Hotspur, Liverpool, Everton and defending champions Wigan Athletic along the way.

This match is somewhat of a glorified friendly and with both teams being able to make six substitutions each, don’t be surprised if it turns into an exhibition at any point.

Bacary Sagna is available to face his former club in his Manchester City debut after switching from the Emirates Stadium over the summer. Chelsea legend Frank Lampard could also make his debut for the Citizens in this match after completing his loan move from New York City FC recently.

Spanish striker Álvaro Negredo could be out for up to three months with a broken bone in his foot. Stevan Jovetić have been impressive during pre-season and Sergio Agüero is fit.

The new season hasn’t yet started and Arsenal already have a couple of injury concerns.

Thomas Vermaelen wasn’t fit for the Emirates Cup last weekend and is a doubt. The Belgian international strongly linked to Barcelona and Manchester United may be sorting out a move away from the club anyway if the transfer rumours are accurate.

New goalkeeper David Ospina had an issue with his thigh last week picked up during the World Cup. It is not yet known whether the Colombian is fit to return. Wojciech Szczęsny can remain in goal.

Theo Walcott is not expected to return until mid-September. The Gunners have Alex Oxlade-Chamberlain, Joel Campbell and new signing Alexis Sánchez as options down the right wing.

Olivier Giroud is working to get in shape in time for Sunday. 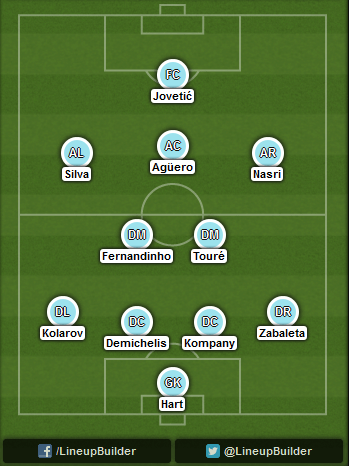 Manchester City haven’t made too significant signings over the summer. We think they will stay with their Premier League winning side where fit to start the Community Shield on Sunday. Don’t be surprised if the likes of Frank Lampard, Bacary Sagna and Fernando make an appearance from the substitutes bench, especially if City are winning.  Manchester City are a very attractive 6/5 to win the Community Shield in 90 minutes – new mobile customers can bet £10, get a free £20 bet with Will Hill. 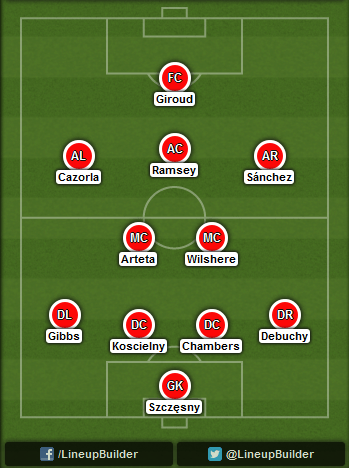 Arsenal’s World Cup-winning trio Mesut Özil, Lukas Podolski and Per Mertesacker will not return to training until after the Community Shield. Their extended break means manager Arsène Wenger will have to make a few changes to his side. 19-year old summer signing Calum Chambers could start at centre-back as he did in the Emirates Cup. He could be alongside another new arrival in Mathieu Debuchy at right-back. Mathieu Flamini is another option in front of the back four, but we’re leaning towards Jack Wilshere and Mikel Arteta to start. We think Alexis Sánchez we get his debut down the right wing.

Centre midfield vs centre midfield
When Manchester City thrashed Arsenal 6-3 in their Premier League meeting at the Etihad Stadium last season, the hosts dominated the centre of the park. Fernandinho even helped himself to two goals as Mathieu Flamini, Jack Wilshere and Aaron Ramsey failed to get any control over the game. There may not be any personnel changes since then so the Gunners will certainly need to step it up if they want to win this one.

Sergio Agüero vs Calum Chambers
£16 million signing from Calum Chambers can be under pressure from as early as his debut for Arsenal with the tall defender set to go up against the talented duo of Sergio Agüero and Stevan Jovetić at Wembley Stadium. He looked to have settled well into the pre-season games last weekend but how will he do against two top attacking players?

Alexis Sánchez vs Aleksandar Kolarov
Arsenal have plenty of playmakers in their team but it is down the wings they may want to look to get the better of Manchester City. Aleksandar Kolarov looks the more obvious choice than Gaël Clichy for manager Manuel Pellegrini with the Serbian more defence-minded. Alexis Sánchez is great with the ball at this feet, attacking defenders and both scoring and creating opportunities. Likes to take a tumble too. Potentially Arsenal’s biggest threat for the City defence.

Prediction: Manchester City 3-2 Arsenal
There have been a few good Community Shield finals in recent years and these two sides certainly have the potential to give us another one. Both ousting with attacking talent, we think we’ll see plenty of goals with the Premier League champions coming out on top.