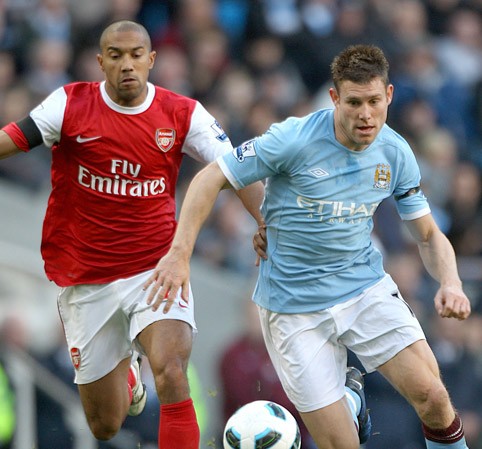 So to be a top team you need attacking fullbacks. This is not just general opinion but to a degree in the modern game it is quite literally a must have. In a time of wingers who cut inside and trequartistas who have far greater mobility,fullbacks provide the width for these players to operate. Of course there are alternatives to this way of using fullbacks, ways that may be better suited to a smaller side, but none the less in today’s time that is the manner of a top side.

So it is that Manchester City have invested in Gael Clichy for 7 million pounds, seemingly to compete with Kolarov. In all probability, he slides behind Kolarov in the pecking order, where at Arsenal he held a tenuous grip on the first team place ahead of Kieron Gibbs and the defensively ‘not there’ Armand Traore.  But then again, perhaps not. In which case his signing could either propell Manchester City onto greater things or make Clichy just another sardine in the very tight can the metaphorically keeps the Sky Blue’s very, very swollen squad. You see, Clichy is very typical Arsenal.

The Good: Lots of pace and not a small amount of skill – Clichy is one of the fastest wingbacks in the premier league – thus if he gets caught out of place as attacking wingbacks can be, then he has the pace to make up the lost ground.

The Bad: Easily distracted. Watch him be distracted by his imaginary pterodactyl friend as McFadden steal the ball at the worst possible time in this clip (at 3:44.) That mistake cost Arsenal the title in 2008 – a type of curse that afflicts Arsenal to this day.

The Good again: Clichy isn’t just pace of course – he also had a sharp attacking edge over his years for Arsenal. In 2008 for example, Manchester United led 2-1 at the Emirates into the very last minutes – and it fell to Clichy to drive toward United’s box and help steal away the three points from the Red Devils.

The Bad again: Clichy for Arsenal nowadays loses more points then he gains for his side – infact since 2008 his attacking edge has

faded away. If anything, it can be argued that Clichy has regressed where he should have been progressing – he is still in his younger footballing years yet he was a better player two years ago.

The Final Good: Clichy even now has potential to be a fine player and one of the great fullbacks.

The Final Bad: Clichy has the potential to cost Manchester City plenty of points along the way.

So there. Clichy for 7 million isn’t along the lines of a massive gamble – but it is one in which there is unlikely to be a middle ground. He sorts out his defensive problems, or he is likely to become just another discarded part in Manchester City’s quest for glory. Because if there is a team that needs to find the right pieces for a crack at the title, if there is one team that will discard Clichy if he can’t improve his standard, it is Manchester City.