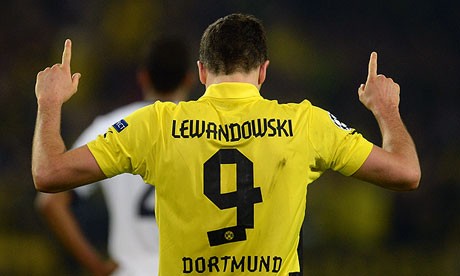 Few weeks ago, it seemed like English clubs have missed the opportunity to sign Robert Lewandowski from Borussia Dortmund, after it was reported that the Polish striker has verbally agreed to join the German giants Bayern Munich.

Lewandowski has claimed to have no agreement with Bayern Munich and further insisted that he is a big fan of the English Premier League.

The 25-year-old, who has less than a year remaining on his contract, told the Daily Telegraph: “I will be able to sign a contract in January, but I have never said that I will sign a contract with Bayern.”

Lewandowski’s contract is set to expire at the end of the season and therefore would become a free agent next summer. Further, he can also sign a pre-contract terms with a new employer in January. He has been an influential figure for Dortmund, as he netted 66 goals in the last two seasons and nine so-far this term, but the Bundesliga outfit would be looking to offload him in the winter transfer window, rather than losing him on a free.

He added: “It was a misunderstanding. It is true I had the opportunity to speak with Sir Alex Ferguson (last year), but we didn’t mention the transfer.

“One day I would like to play in the Premier League. It would be a great experience.”

Manchester United, Chelsea and Arsenal all are reportedly interested for his signature. Though according to Transfermarket.com, Lewandowski could cost around €39m but given his contract situation, Dortmund could be willing to do any business for around £20-25m.

Whether or not English clubs would go for him in the January transfer window is yet to be seen, but the news would definitely boost London clubs Chelsea and Arsenal, as both are desperate to add another quality striker to their ranks.