Manchester United have had some fantastic goalkeepers in their ranks over the last decade with the likes of Peter Schmeichel, Fabian Barthez and Edwin van der Sar all playing their part in the Red Devils’ considerable success. That said, a number of other stoppers have been brought to Old Trafford with much promise but not delivered. The verdict is still out on current number one David De Gea, with the upcoming 2012-13 season set to potentially decide which one of these groups the Spaniard fits into.

With the retirement of Van der Sar Sir last summer, Sir Alex Ferguson faced a dilemma, but the promise of young agile De Gea convinced the Scot to part with £17 million to bring the Atletico Madrid youngster to Manchester. Initially the decision seemed questionable, with high-profile mistakes and seemingly a lack of confidence blighting the new man’s early United career. 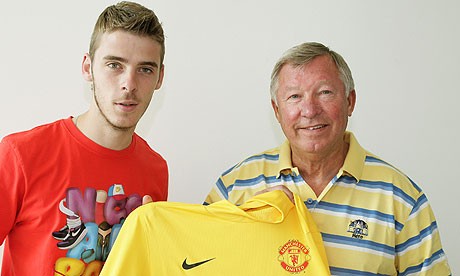 Ferguson opted to shuffle his pack on occasion, knowing that in Anders Lindegaard he had another able stopper to come into the team if so required. Towards the culmination of the season however De Gea seemed more assured and is currently the Red Devils’ preferred choice of goalkeeper going into the new season.

De Gea’s shot-stopping ability has never been in question, and on numerous occasions last term the 21-year-old pulled a world-class save out of the bag to astonish onlookers. The most vivid in the memory is the sprawling one-handed stop from countryman Juan Mata’s free-kick late in a 3-3 thriller at Stamford Bridge. The Spaniards reflexes, agility and reactions indicate that United may well have a star in the making.

De Gea’s Achilles heels since moving to England is his ability, or at times lack of, to deal with crosses. Every fan (and defender) wants to see their goalkeeper confidently claim crosses and command the penalty area, but this is a facet of the game that Lindegaard seemed more adept in. 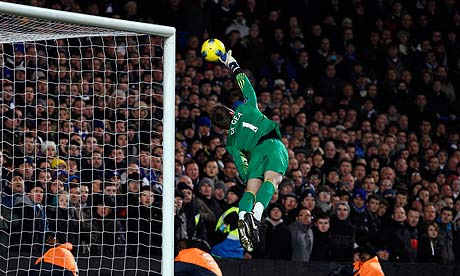 One can point to De Gea’s tender age as a possible reason, with the keeper sure to become more confident with experience and as he gets older. The Spaniard’s slight frame is also an issue, as the English game is more physical and aerial based than that of La Liga in his homeland.

As pre-season starts to kick into full swing, Sir Alex will surely be instructing his wingers to pepper De Gea with crosses in training, as if this area can be improved United certainly have an able and impressive number one. The signs of improvement were there to see as the season went on last term, and if this development continues De Gea could well prove his doubters wrong in 2012-13 and play a large role in United’s title charge.