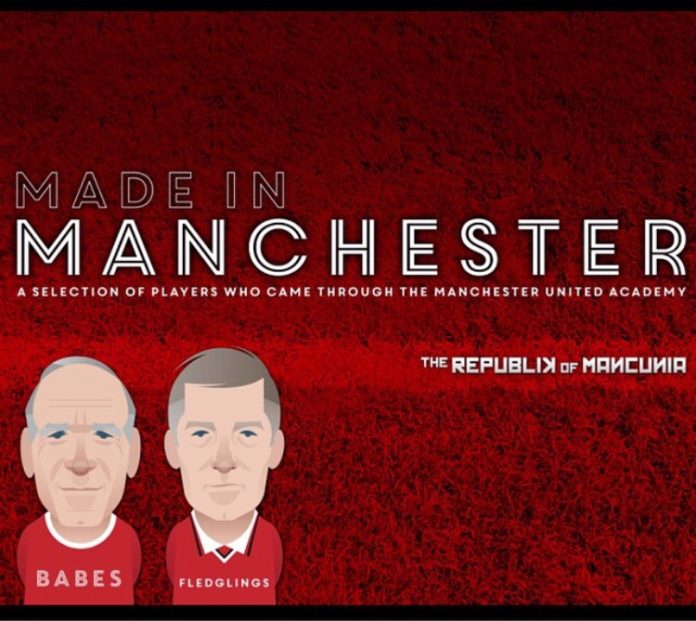 Sir Matt Busby was appointed as Manchester United manager 70 years ago this month, a decision that would change the history of the club forever.

Busby’s faith in the young, local players proved successful as the club would go on to win the English top flight five times, the FA Cup twice, and the 1968 European Cup (now UEFA Champions League) – the first European trophy the Red Devils won.

To mark the anniversary of Busby’s appointment, Republik of Mancunia have published a PDF looking at the greatest players to have come through the Manchester United youth academy, titled Made in Manchester.

All of the profits from this document will go to the Trafford Macmillan Wellbeing Centre which helps people suffering from cancer, and their family.

The download costs a minimum of £5, but you can donate whatever sum you like for the good cause – available on ebook or PDF.

Manchester United are famous for the number of youth products they have produced in the Premier League era alone.

This season has seen Paddy McNair, Tyler Blackett, Jesse Lingard and Tom Thorpe all make their Premier League debuts for United, having come through the youth academy.

Adnan Januzaj and James Wilson are other products who have made a number of appearances for the Red Devils this season. As had Tom Cleverley before being sent out on loan to Aston Villa, and Darren Fletcher, the longest-serving United player at the start of the season before he was released to join West Bromwich Albion a few weeks ago.

Legends in this PDF include The Class of ’92 – David Beckham, Ryan Giggs, Paul Scholes, Gary Neville, Phil Neville and Nicky Butt who each won at least six Premier League winners medals each, with Ryan Giggs having the most amongst them – 13.

The Class of ’92 were fundamental in Sir Alex Ferguson’s Manchester United dominating the Premier League from the early 90s and the start of the new millennium. They also played a significant role in winning the 1999 UEFA Champions League against Bayern Munich at Barcelona’s Camp Nou.

You can download the Made in Manchester PDF from Republik of Mancunia for £5.