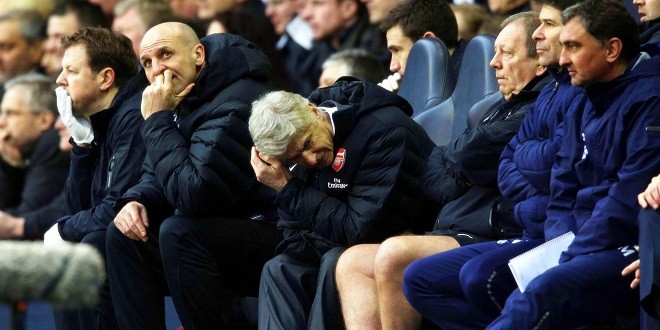 Another big match, another defeat, but Sunday’s 2-1 defeat in North London Derby at the hands of Tottenham could prove to be too costly for Arsenal’s ambition. 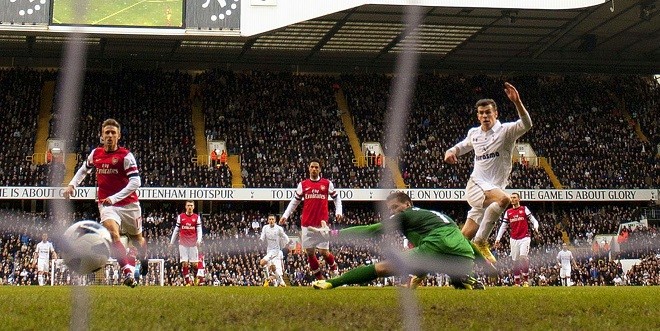 The defeat has left the Gunners trailing their North London rivals by seven points and it had struck a devastating blow to their hopes of occupying one of the Champions League spots this season.

Time and again it has been said that consistency has been the only demon that has impeded Arsenal from reaching where they aspire to be. It was a match they couldn’t afford to lose. Here are five major taking points from the North London Derby.

Arsene Wenger’s strategy of playing a high line defence was working pretty nicely until the recurrent symptom of defensive lapses changed everything.

One of the main drawbacks of playing a high line defence and pressing the opposition high up the pitch is to maintain the focus throughout which is physically and mentally demanding. Of course, at this level, you’re expected to do that.

The problem is Arsenal didn’t close down their opponents enough and in some cases – which proved costly – they just stepped back and allowed the opposition to impose authority.

In the beginning, Kyle Walker just ran from his own half to the Arsenal box, without any obstruction and body check. Fortunately, his cross was cut off in the nick of the time in the penalty area.

However, Gylfi Sigurdsson and Scott Parker were given free space to run and from their through passes, Arsenal conceded twice in the first half. Credit should also go to both Gareth Bale and Aaron Lennon for making the perfectly timed runs but that is not a strong excuse to cover up the defensive frailties of Arsenal. 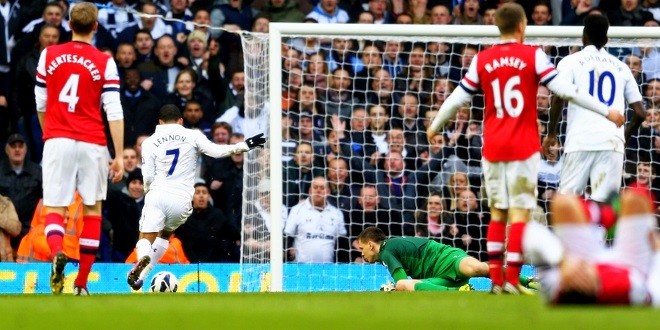 Though Bale made a significant contribution in the match, but it was Spurs’ overall performance that stood out in the end.

Of course, like Arsenal, Spurs played with a high line defence where Jan Vertonghen and Michael Dawson, the two centre-backs, didn’t provide enough mobility either but the cohesion shown by the team, bar Adebayor, made the task easy for them.

As for Arsenal, they had 61% ball possession with 82% pass success, but is there really any value of controlling the midfield, if there’s no significant output: creating chances in the final third? It is in a way negative football.

This is contrasted with some poor individual performances from the visitors. In a high voltage game, you expect your top players to put in strong performances but that was not evident yesterday.

Jack Wilshere, who was supposed to be the fulcrum of “everything Arsenal”, had an ordinary day (attempted 62 passes with only 73% passing accuracy) and more often than not when he fails, his team also looks ordinary.

Likewise, the performances of Aaron Ramsey, Olivier Giroud and skipper Thomas Vermaelen was below par to say the least.

Arsenal have lost the winning mentality in big games. There cannot be any doubt about that. Out of the seven games they have played against the top four teams, they have won one, drawn one, and lost five.

Also, in Europe, the only top quality side they faced was Bayern Munich and the Bundesliga giants taught them a hard lesson, that too at Arsenal’s own backyard.

In the corresponding fixture, they defeated their Tottenham 5-2 at the Emirates, but one has to remember that Spurs were down to ten men after just 17 minutes into the game.

Even yesterday, when they pulled one back in the second half, the drive, energy and willingness to grab the equalizer was missing and that was indeed a very frustrating sight to bear for any Arsenal fan.

With ten games to go, seven point gap is still manageable. But realistically, it is not an easy feat.

The only hope Arsenal have, that could soothe some of their pain, is Spurs have a tough run of fixtures in March and April. They are still to play Liverpool, Chelsea and Manchester City while Arsenal will have to deal with a more-or-less easy run of games from now on.

It is highly possible that Spurs could drop points but are there any guarantees that Arsenal will take full advantage of that?

The London derby exposed the current state of both the clubs perfectly. While Spurs’ lurch in the fresh direction under Andre Villas-Boas, Arsenal are teetering on the verge of decline. The Gunners are declining from the high standards they once set under Wenger.

The stagnation and constant stooping to mediocrity is not helping Arsenal at all. The North London Derby is just another match that probably doesn’t prove anything, but the glaring mistakes that we saw in the game are repeating again and again. When that happens, it demands a change, for the good of everyone.