Liverpool will be looking to overtake Aston Villa in the league on Saturday by collecting three points at Anfield when the two sides meet.

The Reds will be without Daniel Sturridge who got injured on duty with England over the past week. Last season’s 21-goal man will be a big loss to Brendan Rodgers’ team but they are still expected to win.

Eyes will be on Mario Balotelli to perform following his £16 million move from AC Milan over the summer. He will be supported by Raheem Sterling who is a player in form to start the new season.

Liverpool were impressive in their 3-0 dismantling of Tottenham Hotspur at White Hart Lane before the international break.

Aston Villa have surprised a few by picking up seven points from their opening three games. Paul Lambert’s side have beaten Stoke City and Hull City, whilst drawing with Newcastle United.

This points have been picked up despite an absence to both Christian Benteke and Libor Kozák up front. Gabby Agbonlahor is leading the line up front. The Englishman signed a new contract at Villa Park earlier this week.

Liverpool won 14 of their first 16 Premier League games in 2014 – Aston Villa were one of two sides they did not beat during this stretch following a 2-2 draw at Anfield.

Daniel Sturridge could be out for three weeks for Liverpool. Lazar Marković could make his first start for the Reds as he is back from injury now.

Glen Johnson is injured so Javier Manquillo is expected to play at right-back. Martin Škrtel has also been ruled out, so expect Mamadou Sakho to partner Dejan Lovren in the centre of defence.

Emre Can and Jon Flanagan are also both injured for Liverpool.

One big concern for the visitors is a doubt over centre-back Ron Vlaar who missed the Netherlands’ defeat in Czech Republic on Tuesday with a calf injury. The club captain will undergo a late fitness test. 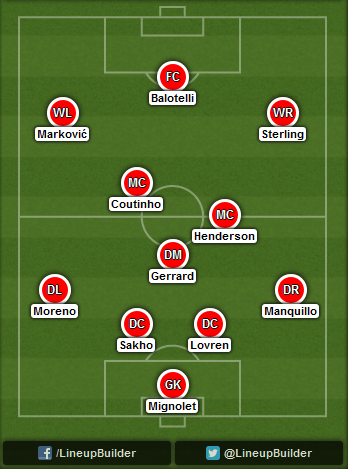 A couple of changes in midfield due to injury. We’re tipping Lazar Marković to start as part of a front three with Daniel Sturridge out injured. 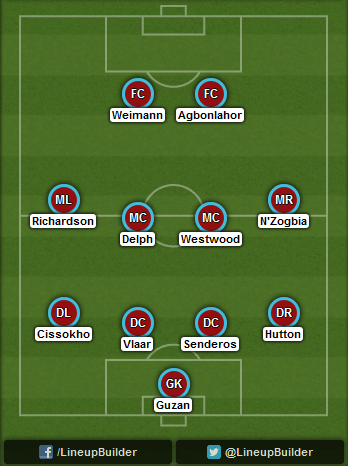 We’re putting Ron Vlaar in the centre of the Aston Villa defence, guessing we’ll be fit. He’s a tough man after all! James Okore is short of match fitness.

Aston Villa played a 4-3-3 here last season and had some success. Christian Benteke isn’t available but we think Paul Lambert may go with the 4-2-2 he lined up with at home to Hull City before the international break.

Raheem Sterling vs Aly Cissokho
Raheem Sterling has been involved in half of Liverpool’s six goals to start the 2014-15 season. The pacey wide man comes up against a team mate from last season in the form of Aly Cissokho who had been on loan from Valencia. The full-back has started well for Aston Villa since signing from the La Liga side over the summer but don’t be surprised if he gets terrorised on Saturday.

Philippe Coutinho vs Fabian Delph
Fabian Delph showed England’s lack of talent at international level by playing both of their games during the international break. The centre midfielder is certainly developing at Villa Park but there’s still a lot more for him to do. He does make some good runs with the ball but is involved in so few of the team’s goals. Defensively he does win the ball back but also concedes a lot of fouls. Philippe Coutinho has had a quiet start to the season but the Brazilian playmaker should be looking for an improved performance here. At worst, he can win a few free kicks in dangerous positions for his side.

Gabby Agbonlahor vs Mamadou Sakho
Look for Aston Villa to cause the Liverpool defence some problems on the counter-attack at Anfield. With Gabby Agbonlahor and Andreas Weimann they have a lot of pace to hit last season’s runners-up on the break. A couple of injuries to Liverpool’s defence makes them ripe for attacking.

Prediction: Liverpool 2-1 Aston Villa
It was 2-2 between these two teams last season but we’re backing Liverpool to come out victorious this season. Daniel Sturridge is a loss to the home side but they still have goals in them with Mario Balotelli and Raheem Sterling. Or Steven Gerrard from the penalty spot. Don’t be surprised if Aston Villa get on the scoresheet with the Liverpool defence not solid and not fully fit.