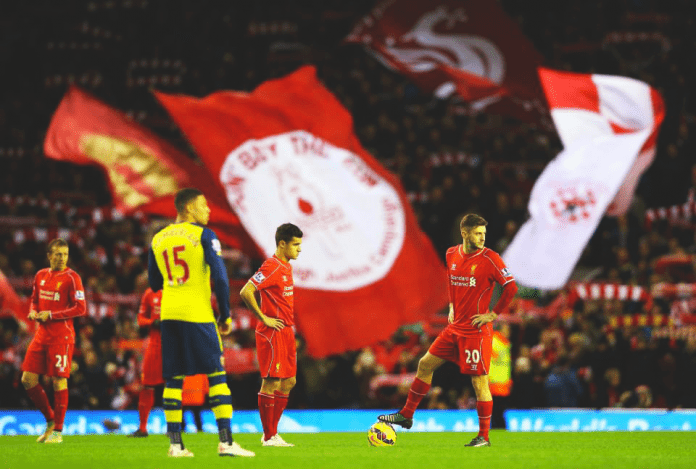 Liverpool and Arsenal continue their poor start to the season as both sides battled out an entertaining 2-2 draw at Anfield this evening.

Liverpool took on Arsenal in a crunch encounter this afternoon, as the Reds look to get back into the top four race. Defeat wasn’t an option for either sides with Arsenal looking to close in on their top four rivals and Liverpool trying to sort out their poor start to the season.

The home side started the game positively and pressed Arsenal back into their own half. Sterling, Markovic and Coutinho added great mobility and pace to the Liverpool attack as the Reds carved out a number of chances throughout the game.

Liverpool eventually went ahead on the stroke of half time, when Coutinho received and lovely pass from Jordan Henderson and smashed it in from the edge of the box. However, Liverpool’s lead was shirt lived as the visitors equalised within a minute when Debuchy headed in from close range.

The second half was a similar story as Liverpool continued to search for a winner and enjoyed a lion’s share of possession. However, the visitors took a surprising lead against the run of play, when an intelligent counter attack by Gibbs and Cazorla allowed Giroud to score on the hour mark.

Lack of presence in the midfield meant that Arsenal never really got a hold of the game and were pushed back time and again by the home side who had 27 shots on goal. The Reds missed a clinical presence upfront due to the suspension of Mario Balotelli and the injury to Daniel Sturridge, and were forced to rely on a late equaliser from Martin Skrtel to salvage a draw.

Overall, Liverpool looked the stronger side and played with great fluidity and discipline just like they did against United and Bournemouth, since switching to a 3-4-3. Individual mistakes from Brad Jones and Martin Skrtel gifted the visitors two crucial goals and that is something Brendan Rodgers will need to cut out of Liverpool’s game if the Reds are to challenge for a top four spot this season.

64th minute – Olivier Giroud gives Arsenal the lead after a lovely play from Gibbs and Cazorla.

Liverpool 2 – 2 Arsenal All Goals and Full… by ViralDailyTV