Liverpool have secured the Champions League qualification already and eyeing for a Premier League glory this season.

The club’s managing director Ian Ayre has said earlier this week that Liverpool will go to any extent to buy top quality players, deemed necessary by the manager.

Liverpool need to bolster on few areas, but immediate attention required is the defence. The Reds need to buy a top quality left-back and have set their sights on Sporting’s Marcos Rojo. 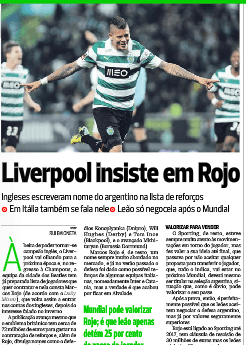 The Reds scouts have watched him on several occasions this season and according to Portuguese press are highly impressed with what they saw.

Sporting meanwhile are not ready to sell at the moment, as they want to wait until after the World Cup to sell him because they believe his value might increase there.

Arsenal meanwhile are also keeping tabs on the 24-year-old Argentine, who can also play as a centre-back if required.

While the Gunners may need a defender to replace Thomas Vermaelen, who could leave the club in the summer, but it seems like Liverpool are genuinely impressed with his performances and could make a move for him in the summer.