Liverpool striker Daniel Sturridge was seen sitting on the ground, dejected as the Reds lost 2-1 at the hands of Arsenal in the FA Cup tie at the Emirates yesterday. 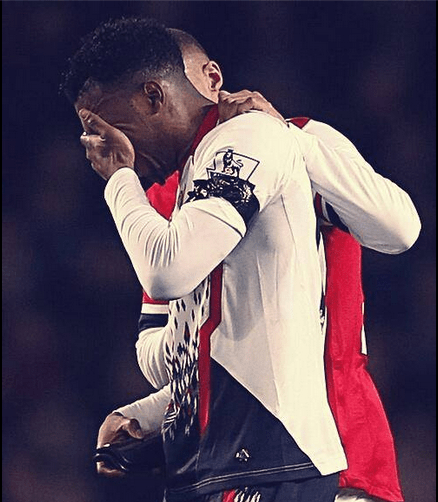 The England striker, who has been in tremendous form this season, missed two very good chances in the opening few minutes of the game and after the match wrote a simple message to share how he feels – ‘heart-broken’.

Sturridge has scored a sensational nine goals in the previous eight games and had he found the net yesterday, it could have set a new club record, but more than personal glory, it is the bitter exit that left him desolate.

Heartbroken. I hate losing. Trying to keep my spirits high even though I’m struggling. I’m keeping the faith… #redordead #dstudge

Brendan Rodgers singled him out in the press conference and praised his commitment for the game. He said:

“He’s a wonderful player, he’ll be really disappointed because he had a chance to break a record today. He’s had three chances that, for him, are big chances.

“He’s always a threat, that’s why you keep him on – his pace will always take him in there. He’s disappointed and he’s disappointed for the team as well because he takes on that responsibility.

“We could have easily had another five or six goals today, but we weren’t as clinical. Daniel will be fine. He’ll be disappointed because we’ve lost and he’ll think he should have scored, but we’ll refocus and go again next week.”

Rodgers has hailed the performance as “outstanding” and blamed referee Howard Webb for failing to point out the foul on Suarez, that should have been a penalty according to him.