Liverpool manager Brendan Rodgers recently said to the reporters that Liverpool will be looking to land five-to-six quality players in the summer. The Reds boss will be given funds to make incursions in the transfer market. Left-back is one of the areas where Rodgers would be looking to improve and according to Daily Mail the Merseyside giants have targeted Argentine left-back, Marcos Rojo, who can also play in central defence, to full the role.

Early this month, we reported that Arsenal are keeping close tabs on the highly rated Sporting defender, as Arsene Wenger is looking for a replacement of Thomas Veramelen. 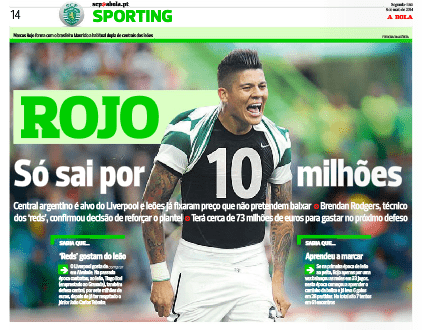 Liverpool scouts have watched him on several occasions this seasons and according to Portuguese press are highly impressed with what they saw.

O Jogo reports today Sporting, who owns only 25% of the player’s economic value, want to want until the World Cup, to sell him because they believe his value might increase there. 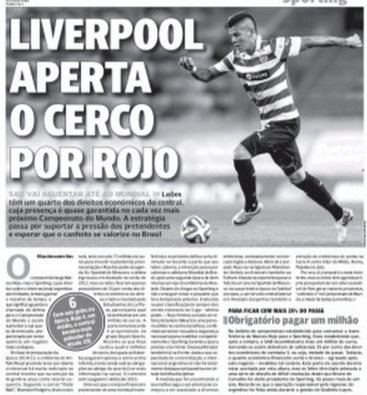 ABola adds that no formal offer has been placed and Sporting aren’t open to negotiate for the player at the moment and should they do, they won’t sell anything for less than €10m. Liverpool desperately need a solid left-back in the summer and could make a move for him.