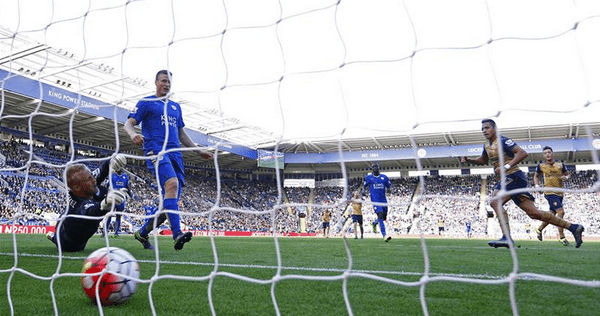 Arsenal are back to winning ways.

After their disappointing 2-0 defeat to Chelsea week, the North London club have now won two back to back games.

Alexis Sanchez scored thrice, Theo Walcott and Olivier Giroud were on scoresheet to give Arsenal a convincing 5-2 victory in the end. We take a look at the goals, highlights and some reactions from the internet.

Leicester, bubbling with confidence (the only team not to have lost a single match prior to this game) started the game brightly and took the early lead.

Jamie Vardy, who earlier had hit the post, scored the opening goal for the Foxes. Cutting inside from the left hand side, Vardy beats a diving challenge from Mertesacker to finish from close range. (Click to Tweet)

Here are some of the reactions to that goal:

Arsenal restored parity through Theo Walcott. The England winger used his pace to beat his marker, and raced on to a nice through ball from Cazorla and finished neatly from close range. (ClicktoTweet)

It was now the visitors’ turn to control the game and they took the lead through Alexis Sanchez, who tapped in to guide the ball home.

32 – Alexis Sanchez has scored his first goal with what was his 32nd shot (inc. blocked) in the Premier League this season. Wait. — OptaJoe (@OptaJoe) September 26, 2015

Alexis Sánchez used the first month, as his own personal pre-season. Normal service has been resumed. #Arsenal

It was all Arsenal from there on. Mesut Ozil, who has been enjoying a fine campaign, produced a wonderful dink over the defence. Sanchez, again did the finishing job.

Vine: Alexis Sanchez gets his 2nd goal of the game to increase Arsenal’s lead vs. Leicester. 1-3. #afc https://t.co/gluSCqao2D

Sanchez is such a lovely player to watch when he is on song. And today, it was his day. The former Barcelona forward completed his hat-trick with his strike:

Video: Alexis Sanchez scores to get his first hat-trick in an Arsenal shirt. 1-4. [via @hughwizzy] #afc pic.twitter.com/a60PU3VawM

Hang on, the drama is not over yet. Vardy scored his second of the match with a stunning curling strike.  Goals galore. Just when I thought it’s all over, Giroud reminded me he still exists. The Frenchman puts the icing on the cake with an injury time goal.

Giroud scores the final goal of the game, 5-2 Arsenal: https://t.co/iVAXy4evKk

Looks like Alexis Sánchez is back. Hat-trick today very well taken. Him and Özil launching Arsenal into the title race.

Send me your thoughts & reactions from the match. Thoughts on everything. Ok, let me help you – Ozil’s form? Walcott as a lone striker? Sanchez back to form – I would love to hear your thoughts.