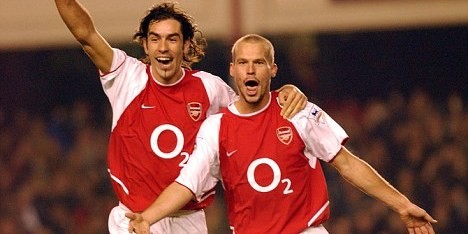 Former Arsenal duo Robert Pires and Freddie Ljungberg have announced that they are to come out of retirement and will take part in…the Hero Indian Super League next season!

Pires, 40, and Ljungberg, 37, both starred for Arsenal during their stunning ‘invincibles’ campaign back in 2003/04 where they managed a whole season unbeaten; a feat that remains unique in the English top flight. Now they will put their creaking joints to the test by turning out in the Indian League, with the pair agreeing short-term deals to help promote the relatively new brand.

They will be joined by a number of other former players including another former Gunner, Mikael Silvestre (who also played for Manchester United), former England number one David James, and Liverpool cult-hero Luis Garcia, with Indian fans surely excited by the prospect of some well-remembered football names arriving.

Missed the BIG news today? Here it is! Fredrik Ljungberg has signed up as a marquee player for the #HeroISL. @freddie pic.twitter.com/1yhuEfp0TJ