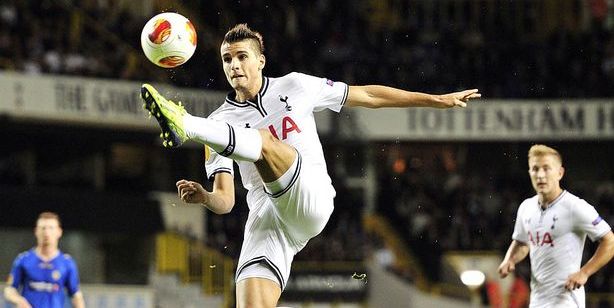 If there’s one thing for certain regarding the sorry episode of Tottenham Hotspurs’ record £30million signing of Argentine winger Eirk Lamela, it’s that there’ll be far more “not my fault” statements than mea culpas emanating from White Hart Lane as the player apparently heads for the exit door. The purchase has all of the hallmarks of a deal that neither the manager at the time, Andre Villas-Boas, or the sporting director Franco Baldini is likely to want to tie their name to.

Anyone whose ever had a bank account bulging with cash from an unexpected windfall will know of the temptation to go out and splash it on things that later turn out not to be wanted.  The purchase of Lamela from Roma for that record fee now very much looks like taking on that sort of appearance.

Reports in the Daily Mail suggest that Juventus would be interested in taking the player back to Serie A. It’s understood that the Vecchia Signora has transfer funds available and that the club’s sporting director is an admirer of Lamela, who made a big impression in Serie A last term, netting 15 goals for Roma before his disasterous move to London.

The problem is however that Juve consider their squad is replete for the remainder of the season, and after winning their last ten domestic games, it’s easy to see why. Any move for the player therefore would have to wait until the summer. That may be too late for Lamela. The Argentine is concerned that his lack of involvement in fist team action will seriously jeopardise his chances of inclusion in the star-studded Argentina squad for the summer’s World Cup in Brazil, and is anxious to solve the problem.

The Mail also reports that the player’s father is acutely aware Lamela’s father of the problem and wants his son to leave London in this transfer window, as staying for the remainder of the season would surely greatly reduce his chances of selection, unless a large swing in his fortunes at the club occurred.

Spurs however are understandably loathe to merely let their record signing leave for a cut price fee merely to satisfy his international ambitions, and will certainly look to recoup the majority of their outlay before countenancing a move. The club is also understood to have ruled out a loan move. There was initial interest from Inter Milan, but Tottenham’s stance on the fee rapidly cooled their ardour.

The issue has become a bit of a running-sore at the club with neither party happy with the circumstances, but no clear way out. The ideal solution of course would be for Lamela to shake off the apparent shackles of his inability to settle in London, and rediscover the form that convinced Spurs to lay out the money for him. That however seems some way off.