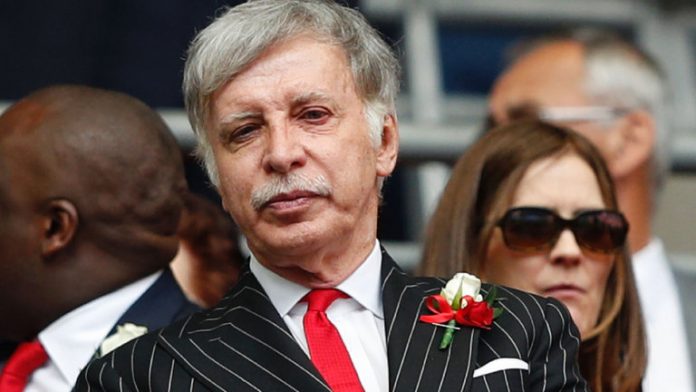 The news that Arsenal’s majority shareholder Stan Kroenke has made a £600 million offer to buy the whole of the Premier League club hasn’t gone down well with many Gunners fans.

Kroenke, who currently owns 67% of the club, has put forward a deal that that would see him buy the remainder of the club’s shares.

Russian billionaire Alisher Usmanov and his company Red and White Securities currently owns 30% of the shares.

The Arsenal Supporters’ Trust, says the proposal “marks a dreadful day for Arsenal Football Club” and it has expressed major concern at what it means for the future of the club.

“Stan Kroenke taking the club private will see the end of supporters owning shares in Arsenal and their role upholding custodianship values,” a Trust statement read.

“By taking the club private, Stan Kroenke will be able to implement the following detrimental actions:

“The AST is also extremely concerned to note that this purchase is being funded by a loan.

“The most dreadful part of this announcement is the news that Kroenke plans to forcibly purchase the shares held by Arsenal fans. Many of these fans are AST members and hold their shares not for value but as custodians who care for the future of the club.

“Kroenke’s actions will neuter their voice and involvement. It is in effect legalised theft to remove shareholder scrutiny on how Arsenal is managed.

“The AST is wholly against this takeover. Arsenal remains too important to be owned by any one person.”

A quick look at their respective records over the past few years suggests Arsenal fans have every right to be worried.

Kroenke’s full takeover attempt is bad news for Arsenal. Aside from the fact that the club will be taken even further away from the fans, his involvement with the various American franchises has certainly not been profitable on the field.

At a time when the club’s focus should be on the transfer window and investing in quality players, Kroenke’s move smacks of a man who has no sense of what it means to run a great club like Arsenal.

Many of the club’s fans believe that sport is all about the money for Kroenke – the timing of this move and his failure to deliver success to his various American clubs suggests that they could well have a point.