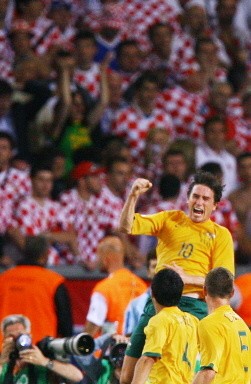 The Hyundai A-League – and by extension, the Football Federation of Australia – reels from one crisis to another. If it’s not declining crowd numbers, owners threatening to close stands rather than see empty seats, franchises folding, disastrous World Cup bids (corruption or not) or even stars entering fan forums, then it’s clubs failing to take advantage of the league’s generous marquee player policy.

Of course most of these problems can be traced back to one thing – A-League clubs are struggling to make ends meet. Football ranks a clear fourth on the Australian football consciousness behind Australian Rules, Rugby League and Rugby Union. Therefore the sport tends to pick up hard core fans, bandwagon supporters leftover from World Cups and the occasional family based around a growing number of Soccer Mums. This is to be expected however, having remained unchanged for five yeras – and the sport, though not making quantum leaps in popularity, forms a much greater part in the nation’s sporting psyche.

The A-League now allows each club three marquee players, ostensibly top-end guys whose wages are not counted towards a team’s salary cap: an International Marquee player, a Marquee Australian and a Marquee Youth player. These rules exist in theory to both lure top end talent and protect young assets. While this is a generous format, the FFA (who administer the A-League) does not contribute to the players’ salaries, the result of this being A-League clubs draw five to ten-thousand fans per match are forced to pay players like Sergio Van Dijk, Robbie Fowler and his Perth Glory replacement Liam Miller serious dollars.

In business, organisations must almost always spend money to make it. It’s the way the world works – wise investment brings about fiscal rewards and peace of mind. It was thus when Dwight Yorke signed for Sydney FC for the A-League’s first campaign – he signed for the lifestyle, found the football to his liking, led Sydney to the A-League title and secured a move back to the English Premier League with Sunderland. It was coincidence that he (along with the Victory’s Archie Thompson) was the first big name to join, but he is now the A-League’s definitive Marquee Player and the benchmark – for better or worse – by which all subsequent imports are judged.

Yorke’s situation was the perfect combination of circumstance: famously involved in a big club (Manchester United), with a sparkling, eloquent public profile and due to Trinidad & Tobago’s 2006 World Cup campaign, still with reasons to perform other than personal pride. That Manchester United connection created a 10% increase in crowds across the league – Yorke was a man the crowds came to watch. Subsequent marquee signings like Robbie Fowler haven’t had the same impact either on the pitch or as a league ambassador.

The marquee player must in future be modeled on Dwight Yorke. He shouldn’t be the only prototype as South Americans also could well check the requisite boxes, but it must be remembered antipodean crowds have a far greater knowledge of European football than the Samba style (no, not Christopher). Not only must such a player sparkle on the pitch, but he must be able to provide a lift to the league in the media.

Some players linked to out-of-cap positions – like Harry Kewell – could perform those functions; others however, most notably Serb striker Mateja Kežman, are a risky proposition. Melbourne in particular has a large Slavic population and could provide a slight bump in local crowds but club executives must ask themselves if a player such as serial-mover Kežman could warrant such spendthrift expenditure – does his one season at Chelsea, four at PSV and cups of coffee at Fenerbahce, PSG and Atletico really provide the league-wide PR lift the A-League so desperately needs? While his age and skills could well justify the salary slot he’d take up, would his name inspire the Rugby League fan to join? Or the AFL nut?

Australian soccer consciousness, so far increased since the magical 2006 World Cup, is still really in its infancy. It is so far behind that, for better or worse, it takes big names, not just quality footballers, to get the alert sporting landscape to attend. And with the local clubs haemmorhaging money, is it in fact prudent to spend $40,000AUD a week on a player not a “sure thing”?

The FFA must step in and contribute. Perhaps it could facilitate local teams signing the fading superstars of the game, if only on one-season deals. Though the game’s governing body is skint from a highly unsuccessful World Cup hosting bid, contributing a small percentage of an international marquee player’s salary to each team strictly for that purpose could be an option.

While Australian “marquee” players aid the competition, the league now understands it is names who will grow the sport. Of Australians, only Kewell could fit that bill. It takes money to make money and as abhorrent as spending more money sounds to leaky propositions such as Central Coast and the Gold Coast, prudent investment may be the best way forward.

Would Roberto Carlos, Alessandro Del Piero, Shunsuke Nakamura or even Theofanis Gekas be interested in a final payday? Even though Clarence Seedorf and Florent Malouda have suggested a desire to play in Brazil, both have the requisite stature and ability for them to be attractive targets for Aussie clubs. Perhaps with all six the answer would be negative, but certainly they would be players of whom League chiefs should be aware.

The A-League is a good league. By inspiring the masses – and cashing in on their attendance – it can become very good.

For more commentary and analysis, shoot across to Matthew Wood’s blog, Balanced Sports. You can also follow him on Twitter; @balanced_sports.