From Spain: Arsenal made €65m bid for Benzema

Arsenal have lodged a €65m bid to sign Real Madrid striker Karim Benzema, according to Spanish newspaper AS. 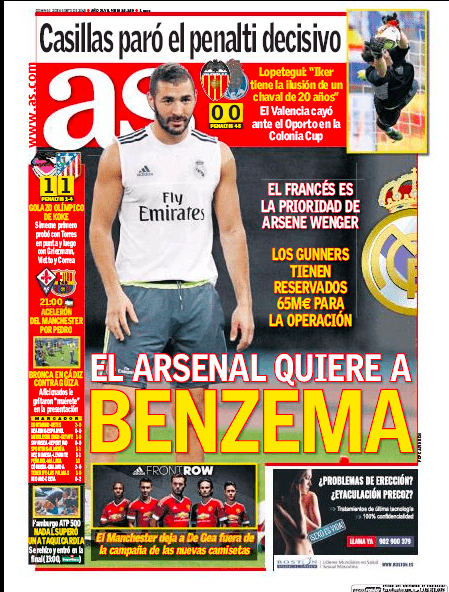 Wenger has been a long term admirer of Benzema, and the Frenchman has tried his luck again to lure the French striker to join Arsenal. AS claim that Arsenal have made a massive €65m bid for Benzema, although Wenger is aware of the difficulties in signing him.

There is a growing feeling among the Arsenal fans that the team need an upgrade on Olivier Giroud to mount a serious challenge on the Premier League title. Therefore signing a striker is a top priority for the Gunners. And Benzema is Wenger’s first choice. Arsenal boars have listed other candidates, but Benzema remains Wenger’s top priority.

Wenger admitted last week that getting Benzema would be near-impossible but AS believes that is aimed to divert the attentions.

At Arsenal, Benzema will be united with a lot of French players which will make life easier for him to adapt to a new environment. Already the Gunners have Debuchy, Flamini, Sanogo, Koscielny, Coquelin and Giroud in their ranks, plus Benzema would be reunited with his former team-mate Mesut Ozil.

Arsenal haven’t had a world class striker ever since Thierry Henry and Robin van Persie left the club. Benzene would not only improve the overall quality of the squad, but the Frenchman could be that stellar signing that could galvanise the dressing room and the fans as well.

Having said that, Real Madrid have no intentions to sell their star striker at this moment, but as you know, things can change quickly in the transfer market.