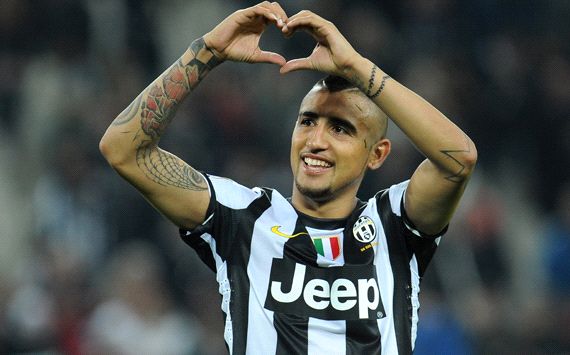 According to the Daily Star, Manchester United will have to pay the equivalent of £62 million for Juventus star midfielder Arturo Vidal.

The United forward, Nani, valued at £12 million, will be added on to the £50 million asking price and Juventus may even want Patrice Evra as part of the deal as well.

Vidal has been very impressive over the last few seasons and interest from other big clubs has been increasing. He played a total of 42 games last season in all competitions (including the World Cup), scored 18 goals and provided 5 assists as he helped Juventus to win their 3rd consecutive Serie A title.

He is known as being a box-to-box midfielder, who can run tirelessly, is strong in the tackle and is also dangerous going forward.

However, Nani has had a less successful time at Manchester United over the last few years. Due to injury and poor form, he only played 11 times last season, scoring 2 goals and getting no assists. Nani might be looking for a move away from Old Trafford to Italy to re-ignite his career.

The high price for Vidal may cause United manager Louis van Gaal to look elsewhere. Earlier this week, Sporting Lisbon claimed that they would sell 22-year-old William Carvalho if the £37 million buyout clause is triggered. The Portuguese midfielder has been linked to United recently and would provide a cheaper alternative to the Chilean.

In addition, it has been reported that van Gaal is a fan of veteran midfielder Nigel de Jong if both of those players are too high in cost. The 29-year-old’s value is around the £10 million mark.