Juventus are UEFA Champions League semi-finalists for the first time since the 2002-03 season where they beat Real Madrid only to lose the final on penalties to AC Milan after a 0-0 draw at Old Trafford.

Real Madrid are looking to become the first team to defend the Champions League in its current format, since AC Milan back in 1990 when the competition was then known as the European Cup.

These two teams are both amongst the top six sides in European Cup and Champions League history to reach the final four.

The Italian side have one notable injury in that Paul Pogba is out of the first leg and only questionable whether he will return to play at the Santiago Bernabéu next week.

Likewise, defender Martín Cáceres may return for the second leg but won’t feature in the first.

Kwadwo Asamoah’s season is over with a knee injury.

Karim Benzema has been ruled out of the first leg with a knee injury. Javier Hernández and Jesé are the two strikers included the squad by manager Carlo Ancelotti.

Luka Modrić is also injured and Sami Khedira has not been named in the squad for the first leg, meaning the defending champions are short in defensive midfield options. Sergio Ramos played alongside Toni Kroos in a 4-4-2 formation at the weekend. 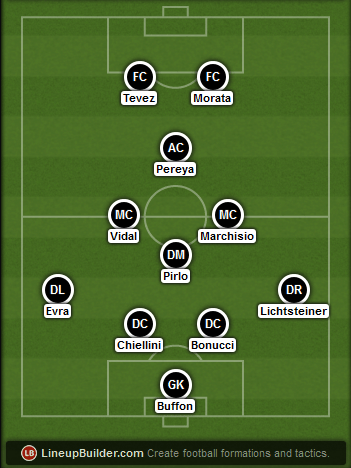 Juventus play with a 4-3-1-2 formation that includes former Manchester United left-back Patrice Evra. Once again they have the best defensive record in Italy, conceding only 19 goals in their 34 Serie A games this season. They have kept clean sheets in their last three Champions League matches too. Paul Pogba’s absence should see Roberto Pereya start in midfield, with Andrea Pirlo creating chances from deep. Carlos Tevez is their top scorer in Europe this season. 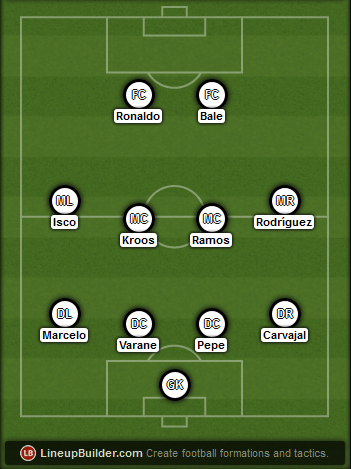 Carlo Ancelotti started with a 4-4-2 at the weekend due to absences in midfield. The only change we’ve made from Saturday’s game is to start Gareth Bale over Javier Hernández. With Sergio Ramos lining up in midfield, this is his strongest back four and arguably his strongest XI with the absentees. Chicharito will probably start if the Italian goes for a 4-2-3-1 formation, flanked by Cristiano Ronaldo and Bale.

Cristiano Ronaldo vs Stephen Lichtsteiner
Juventus’ right-back enjoys getting forward but we expect the Switzerland international to spend a lot of time in his own half over both legs to deal with Cristiano Ronaldo. He’s coming off a hat-trick from the weekend, although those goals were all scored in and around the six-yard box where you’d expect the Juventus centre-backs will be dealing with him. When he pulls out wide, Lichtsteiner cannot afford to let the Portuguese international have space in and around the penalty area on his lethal right foot. He’ll be supported often by Marcelo bombing on from left-back.

Gareth Bale vs Patrice Evra
Whilst the world record transfer signing hasn’t had too much love from his own supporters this season, Gareth Bale is a match winner. He provided a delicious cross from which Ronaldo scored Madrid’s third in their 3-2 win at the weekend, and is a threat at both creating and scoring goals. Patrice Evra will need to be careful in not getting too far forward from left-back because Bale has pace and is a great dribbler to cause danger to the Juventus defence. The French international could struggle when Bale cuts inside.

Carlos Tevez vs Pepe
Real Madrid conceded two goals at the weekend and Iker Casillas had to thwart a number of attacks late on at the weekend. The defending champions still don’t look the best at the back so the likes of Calos Tevez and former-Madrid player Álvaro Morata should see some sights on goal in this match if that trend continues. The Argenine is supported by the likes of Andrea Pirlo, Claudio Marchisio, Arturo Vidal and Roberto Pereya creating chances in midfield.

16 – These two sides have on 16 occasions previously in this competition, with Real Madrid leading the way with eight wins to Juventus’ seven, and only one draw between them.

54 – Juventus have lost only one of their last 54 competitive matches at home (45W, 8D). That was to Fiorentina in the Coppa Italia back in March.