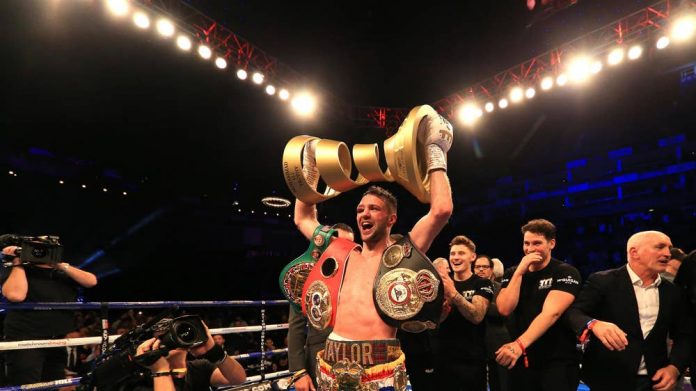 The World Boxing Super Series (WBSS) Final for super-lightweights brought together two elite, reigning world champions Josh Taylor and Regis Prograis for a wonderful night of boxing at the O2 Arena in London.

How Prograis and Taylor reached the WBSS super-lightweight final

Regis Prograis fighting out of Texas, USA arrived into the super-lightweight final of the WBSS after two hugely impressive performances. Prograis defeated the tough and durable Brit Terry Flanagan, who himself was a former world champion at a lighter weight, in the quarter finals. This was an action packed fight with Prograis sending Flanagan to the canvas for the first time in his career, on the way to a relatively one-sided points win.

Prograis then took on the underrated and aggressive WBA world super-lightweight champion, Kiril Relikh of Belarus. The Belarusian pushed the action from the start of the fight but Prograis was too clever and heavy handed for him. Prograis floored Relikh at the end of the first round with a devastating body shot and dominated throughout. Relikh was eventually stopped in the 6th round after a barrage of unanswered punches. Prograis became the new WBA world super-lightweight champion and advanced to the final of the WBSS.

Josh Taylor of Edinburgh, Scotland, faced the unknown and unheralded American Ryan Martin, in his quarter final bout. Taylor took control of the fight after the third round. Taylor out-hustled, out-fought and out-thought Martin who seemed bewildered by the volume and speed of Taylor’s punches. It was no surprise to see Taylor stop Martin in the 7th round of this one-sided affair.

Taylor was then matched against the stocky and rugged IBF world super-lightweight champion Ivan Baranchyk of Belarus. This was a close, competitive fight decided by a brilliant 6th round for Taylor who nailed Baranchyk with a short right hook. This punch caught the Belarusian off-guard and he fell to the ring mat. Baranchyk rose to his feet but was clearly dazed. Sensing victory Taylor swarmed all over Baranchyk and put him down again just before the bell. Baranchyk somehow survived. Taylor then cruised to the final bell and secured the points decision with all three judges siding in his favour. After this victory Taylor won the IBF world super-lightweight title and reached the final of the WBSS.

Taylor and Prograis entered the ring as defending world champions. Both after wining world titles in their semi-final match-ups. This fight between two established and talented fighters did not disappoint.

From the first round it was clear this was a world class contest. Everyone watching around the world was in for a treat. Prograis the significantly smaller fighter was looking to use his excellent jab and lateral movement to confuse Taylor whereas Taylor sought to fight in close and use his superior hand speed and size to bully Prograis.

By the 5th round the fight was nip and tuck. However Taylor took control in the 6th round with a number of eye-catching punches. Also, Taylor’s sheer size, workrate and intensity seemed to be wearing Prograis down. Prograis’s punch output was depleting and he seemed to be feeling sorry for himself. This continued for the next three rounds. By the 9th round, Taylor had established a clear lead. Taylor looked the more determined fighter and was beating Prograis to the punch. Taylor’s inside fighting ability was shining through as he pushed the smaller Prograis back. Prograis did return fire with some sharp jabs and body shots in particular but they were not deterring Taylor from coming forward.

Prograis seemed to get a second wind by the middle of the 10th round. The American looked more like the fighter of the first four rounds. Prograis was jabbing excellently on the back foot and nailing Taylor with some beautiful overhand lefts. By this point Taylor did seem to be more wary of Prograis’ power and was not able to get inside as often as he had done.

Prograis finished the fight strongly by landing the more telling punches. One of Prograis overhand left’s caused serious damage to Taylor’s right eye. It was a badly swollen, bloody mess and was impeding Taylor’s vision. In the final round Prograis could sense Taylor was in trouble and tried his best to land what would have been a fight-changing punch. Unfortunately for Prograis he couldn’t quite land that punch he so desperately needed to salvage any chance of a victory. Taylor managed to stay on his feet and hear the final bell despite his severe eye injury and evident tiredness.

This fight of the year contender, headed to the scorecards. After watching the fight closely a score of 115-113 in Taylor’s favour which is the equivalent of 7 rounds to 5 seemed about right.

The legendary ring announcer Michael Buffer called both fighters to the centre of the ring. Buffer announced the three judges scorecards as 114-114 a draw and 115-113 and 117-112 in favour of the winner…Josh Taylor. The Scotsman had done it. Taylor had won the WBSS tournament and the much coveted Muhammad Ali Trophy alongside retaining his IBF world super-lightweight title and capturing the WBA world super-lightweight belt.

This was an extraordinary fight where history was made. Lets hope Taylor and Prograis part II happens next year.

There were a number of important fights on the undercard including fights involving Dereck Chisora, Lee Selby and Lawrence Okolie.

Dereck Chisora implementing a Joe Frazier style backed up the unprepared and outgunned 6ft8 Liverpudlian David Price. Chisora dominated Price who seemed scared to throw any meaningful punches. After three one-sided rounds, in the 4th round Chisora landed a short left hook to Price’s temple which sent him scrambling to the ropes and then falling to the floor. Price rose to his feet but his corner did the right thing and threw in the towel. This was a mightily impressive performance from Chisora who seems reborn and re-energised under the guidance of former foe and former world heavyweight champion David Haye.

This was an intriguing match up between a former world champion at featherweight Lee Selby and a former three weight world champion in Ricky Burns. Selby looked back to his ‘Welsh Mayweather’ best in the first seven rounds. Selby toyed with Burns, making him miss and making him pay. However Selby started to tire and Burns started to apply consistent pressure. Burns landed a number of big punches from rounds eight to twelve and was the stronger fighter in the ‘championship rounds’. Despite this, Selby’s early dominance must have impressed the judges as he held on for a narrow points victory.

This fight was for Yves Ngabu’s EBU European Cruiserweight title. The fight itself was poor. Both men struggled to land any meaningful punches of note in the first six rounds. It seemed to be following a similar pattern to two of Okolie’s previous wins over Matty Askin and Isaac Chamberlain. Those were two horrendous fights which Okolie won comfortably on points. Yet in the 7th round that all changed. Okolie landed a left hook to Ngabu’s temple which scrambled his senses. Okolie then delivered a vicious straight right hand. Ngabu was still on his feet against the ropes but in no fit state to continue. The referee seeing this jumped in and stopped the fight. Okolie secured the EBU European Cruiserweight belt in just his 14th fight. Okolie will now be looking to progress to world honours in 2020.