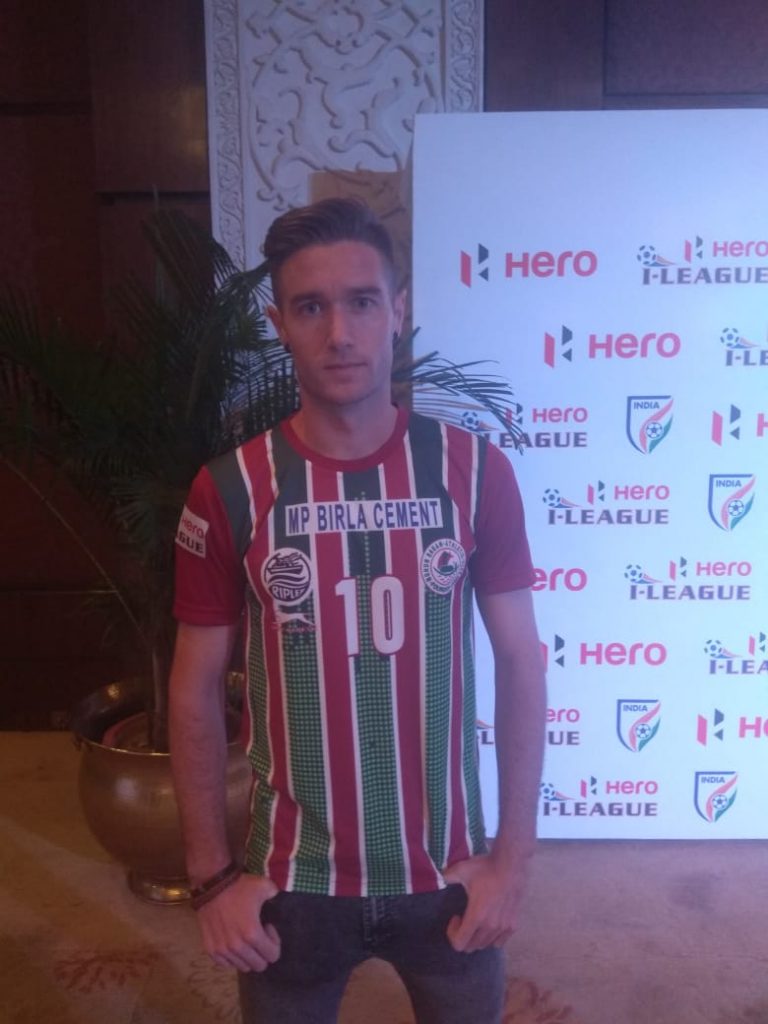 Last season was a disaster for Mohun Bagan in the I-League.

The iconic football club from Kolkata finished 5th in the table with 29 points, 14 points behind league winners Chennai City FC.

The 29-year-old forward has played all his professional football till now in Spain, but he speaks with so much pride and passion about playing for The Mariners as if it’s his home town club.

The Hero I–League has witnessed many a fairy-tale in recent years with underdogs such as Aizawl FC, Minerva Punjab FC (now Punjab FC) and Chennai City FC winning the previous three editions.

Ahead of the 13th edition of the competition, which will kick off on November 30, 2019, Beitia is excited and confident at the same time that the trophy will return to Kolkata this time.

“We’re very excited to start. I think we’re ready for this challenge. We have got a very good team, and we will try to win the competition,” said Beitia in an exclusive interview with Sportslens.

“I will try to do my best. I will try to help my team. I don’t like to set personal milestones, and my only focus is to play football, and help the team.”

There is a lot of optimism among the fans with the arrival of José Antonio Vicuña as the head coach of the club, as the 48-year-old is vastly experienced and has been with the management set up for clubs like Osasuna, Legia Warsaw and Lech Poznan.

Beitia feels that they are training hard, and constantly improving under Kibu Vicuna.

“Kibu is a very good coach. He is very intelligent and has a lot of experience. He is always trying to help us. He tries to teach us his style, and for me personally, he is very good.”

The Spaniard is also in awe of Bagan legend, Jose Ramirez Barreto, who will work as a guest coach for the Kolkata-club. While Barreto is mainly looking to exchange coaching ideas with the management, he has got a new-fan boy in Beitia who is stunned by the adulation the Brazilian receives from the fans.

“Barreto here is like a God for the supporters. For me, it’s amazing to meet him. He is a very nice person,” Beitia added.

Bagan finished second in the CFL this season behind Peerless where their defence was criticised. Beitia is aware that the defence needs to improve, but at the same time, he feels that this is a team in transition and that they are improving in other areas as well.

“Defending is always important. It is a priority. Yes. We’re improving in a lot of things. We’re in transition, scoring a lot of goals. There is always room to do better. We’re training hard, and we’re ready.”

Back in May this year, Vicuna said he was keen to look at the young players at the club and build a team that suits his style of playing free-flowing football. Beitia is equally excited about some of the young talents that are coming into the senior ranks from the club academy.

“We’ve got some very good young players. I love my team. I don’t like to choose one player over others, but I think they have a good future. They are highly talented. With every passing day, they are improving a lot.”

Mohun Bagan will begin their 2019-20 I-League campaign with a trip to Mizoram to face Aizwal FC.