Time is probably running out for Porto striker Jackson Martinez to seal a move elsewhere. He was linked with a move to Valencia in the past couple of months, but the interest had died down, as the Los Che signed Rodrigo Moreno instead.

The 27-year-old has long desired a move to the Premier League. Back in December last year, he admitted that he used to support London clubs Arsenal and Chelsea, when he was a kid. 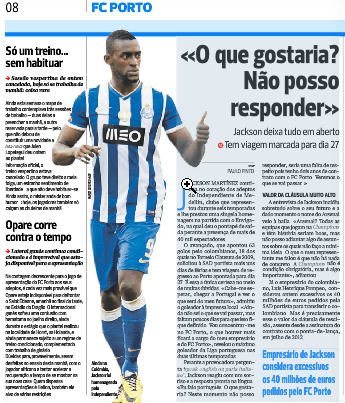 “Where would I like to play?” Martinez told Gazzetta dello Sport. “When I was a child I rooted for Chelsea and Arsenal.

“I think the best championships are La Liga, the Premier League and Bundesliga, which has grown much in recent years. But I also really like Serie A and have many friends in Italy.”

He further added: “My £34million buy-out clause seems a huge amount. In one year my value has exploded. I did not expect to do so well.”

Now 27, the time is ideal for him to make a move. But who will take a gamble on him? Chelsea, Manchester United, Manchester City and Liverpool – all are stacked with top strikers which leaves Arsenal as only favourite to lure him.

The Gunners have signed Alexis Sanchez from Barcelona will add a new dimension to their attacking department but the Chilean is hardly a number nine and Arsenal may need a proper striker to complement/add competition to Olivier Giroud.

Recently, in an interview, he was asked to comment on future and Arsenal specifically. He said he won’t reveal anything about his future out of respect towards Porto. When asked about an interest from Arsenal, he says they’re a “great club” with history and that will play the Champions League.

Martinez has a contract till 2016, and has a €40m release clause on his contract. Porto own 60% of his economic rights while rest belongs to investment parties.

Martinez have attracted interest from Chelsea as well, but can’t see the Blues moving for him this summer, having already signed Diego Costa from Atletico Madrid.

Soccerlens’ expert from Portugal Manuel Traquete says: Well, Portuguese clubs, even the biggest ones, need to sell assets in order to balance their finances, they’re not really in a position where they can refuse huge offers for their players. If a big offer for Jackson comes, Porto will sell him. Their model relies on selling assets for big money to remain solvent.

Well, Jackson we got out our hint. Over to you Arsene!