Hope Solo is the goalkeeper for the US national team, a 2008 Beijing Olympic Gold medalist, and now the undaunted keeper for St. Louis Athletica, a WPS team currently at the bottom of the table.

Noted for her outspoken comments about her coach’s decisions during the World Cup, she is just as genuine and forthright now speaking about her decision to become a goalkeeper, why England should have a women’s league, and why MLS should increase their international roster slots. Solo also revealed that she’s become a Seattle Sounders fan.

Read the Soccerlens interview with Hope Solo, after the jump.

LE: I saw you play the Boston Breakers in freezing rain at Harvard Stadium three weeks ago. How did the conditions affect your game?

Solo: I could care less about stadiums, to be honest. It was kind of old-school turf and turf is kind of a different game for us, and that turf was carpeted, very slick, very hard and the wind, the rain, the conditions definitely not ideal.

LE: Athletica fell 2-0 that night and a few weeks earlier the national team suffered a tough loss to Norway on a PK in the Algarve Cup, although you won the distinction of Player of the Tournament. But it must have hurt because the national team had won that Cup the previous two years. Walk me through the process of a picking yourself up after a defeat and moving ahead. 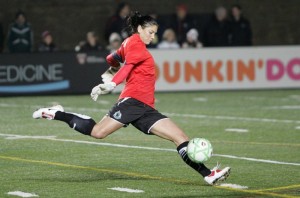 Solo: We don’t want to lose because of our competitive nature, which is at an incredibly high level. No one wants to lose, period. It should hurt, it should sting, and you don’t want to feel that feeling again. I don’t think it’s very tough to pick yourself up because you go into the next game and you don’t want to feel that feeling again. To me it’s quite easy. I have a problem with players who don’t take the loss personally. At a professional level you should, it’s our job, it’s our livelihood, it’s who we are at this level. Every loss should be taken that personal.

LE: Tell me about your college career and how you became a goalkeeper.

Solo: I went to the University of Washington at Seattle. I had made a vow to never stay in my home state to play, I wanted to go as far East Coast as possible, more or less to get away from my family life. I was a seventeen year-old wanting to get away and run, but I ended up staying in my home state and fell in love with it. I ended up having a beautiful relationship with my family over time and it was the best decision I’ve ever made.

I also had to make the decision of whether I wanted to be a full-time goalkeeper or a full-time field player. I was a very good field player so that was a hard switch for me to make full-time in college. It was horrible, to this day I ask myself why I’m a goalkeeper!

I’m actually very proud of it now, but it took years. I played soccer all my life and I used to think growing up that they put the fat kid in goal or they put the kid that wasn’t good with the ball at their feet in goal and I never wanted to do goalkeeper, I was always the goal scorer. But with that said, because I was so athletic, I excelled very quickly at goalkeeper, so I was kind of ahead of my time. I was a fit goalkeeper, very athletic but good with the ball at my feet, good footwork, so I went far pretty quickly as a goalkeeper.

LE: Did you go into it thinking “I’m going to be a goalkeeper” or “I’ll try it out and if it doesn’t work, I’m back on the field” ?

Solo: I think once I made that decision it was either all or nothing. I know I can play on the field at a very high level – even to this day with some training, but I made my decision and I stick with it.

LE: Do you think the NCAA should relax their restrictions on college soccer and expand it to a two-season sport?

Solo: Yes, I think it would help the sport.

LE: Why isn’t there a women’s professional league in England where you’d think it would have evolved first with all the history and culture?

Solo: It’s kind of frustrating. I play with Eniola Aluko, an English player, and we were talking just the other day about how sad it is that England really doesn’t have a women’s league because they have some incredible players, some of the best players in the world. And they don’t have a women’s league! Germany, Japan, has a women’s league. WPS is what American players have talked about for years and fortunately we have great support for soccer, we can make this our livelihood, and we can put every ounce of time and money and passion into our sport, which is also our job.

It’s unfortunate that in England we heard that players weren’t getting paid for taking time off and going to the World Cup. They have to take a lot of time off and I don’t know if it’s five, six weeks they spent over there, but was it worth it in the long run, losing money if they have jobs back home? I don’t see how that’s supportive, in terms of the Federation, in wanting them to train harder in an effort to win that World Cup.

That’s what we need as American players if we’re expected to win a gold medal or win the World Cup every time, we need the support to do so, whether financially or with health insurance – it doesn’t matter, but the US players have stuck together for a long time and US Soccer has supported us for a long time. It’s unfortunate because England could be so incredibly good – they are great, but they could be better. 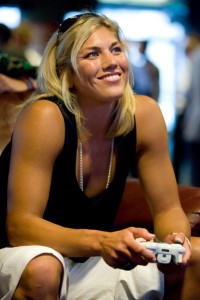 LE: Is MLS supportive of WPS?

Solo: No, we have entirely different leagues, they’re not supportive. Keep in mind though, that England has much richer clubs than we do here, I don’t think we have any high profile MLS clubs, to be honest. They’re just trying to make their own money and meet their own ends, so they’re doing things on their own for good reason.

LE: Do you think Don Garber’s recent suggestion to expand the international roster in MLS would improve that league?

Solo: Yeah, I do. I think it’s incredible to see some of the foreign players come over to the MLS side. If the money is there and we have the opportunity to get more players, America would really appreciate the quality of play, which in essence would improve the sport in America.

LE: Do you think MLS and WPS should be marketed separately or do you think there are joint opportunities?

Solo: I think there are opportunities with doubleheaders. Their fan base is more or less the same soccer fan base that we’re all trying to market to. I think the women’s game gets more family coming together and young girls, but overall we all want that soccer market and I think if we have doubleheaders many of the audience would stay.

Solo: Now that Seattle has a team in my hometown, I’m all behind Seattle Sounders as far as catching every single game and very much enjoying it. I’m glad MLS is expanding and will have three teams in the northwest now. I never had a favorite team until this year with Seattle.

LE: WPS is already planning to expand with three new teams, with Philadelphia starting up as the eighth in 2010, that’s pretty fast isn’t it?

Solo: I think it’s a little fast but at the same time I think it’s incredible for the sport to get more players, bring over more internationals, raising the quality of play. I think we could go another year with seven teams, but if we can afford it, if our investors can afford it, why not bring in another team?

LE: What’s the relationship between your club St. Louis Athletica and the proposed MLS franchise in St. Louis?

Solo: Actually, it’s our owner of the women’s team, Jeff Cooper, and he’s going after an MLS team as well. I think there would be a lot of similarities if he won the bid. We’d be sharing facilities, we’d be sharing ownership, and I think in the future our owner is going to be the model that other teams are going to try to follow behind.

LE: What are your personal goals this season?

Solo: Even though we’re in last place right now, it’s still early in the season. There’s 17 more games and my goal never has changed, and that is to win the entire league. The inaugural year would be incredible, that’s my #1 goal.

If you liked this interview, you might also want to check out our interview with Heather Mitts.