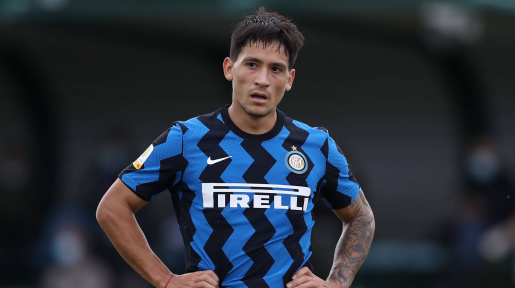 Inter Milan striker Martin Satriano has said that he is flattered by the Premier League interest from Arsenal and Chelsea.

The 20-year-old joined the Nerazzurri from Uruguayan side Nacional in January 2020 and he has since featured for the club’s youth team.

He has yet to make his debut for the Serie A leaders but made the bench on a few occasions during the first half of the campaign.

Both Arsenal and Chelsea are keeping tabs on the Uruguayan and, speaking to The Mail, the youngster said: “It is always flattering (the interest from the Premier League) – yes, it is a sign that I am doing things well and that I have to continue down that path.

“It is a very competitive league where any team can beat anyone. But, for now, I am totally focused on Inter and to do the best with them.”

Satriano is still awaiting his first-team debut for the Nerazzurri but he has made his mark in Primavera 1 with seven goals and four assists from only 14 games.

With the Nerazzurri currently top of the Serie A, it is unlikely that he will break into Antonio Conte’s plans for the remainder of the season.

Meanwhile, both the Gunners and Blues have provided a platform for young players to excel and Satriano may benefit from a switch to either club.

The likes of Mason Mount, Tammy Abraham and Reece James have been regulars for the Blues over the past 18 months after impressive loan stints.

The same has been the case with the Gunners where Bukayo Saka and Emile Smith Rowe are almost undisputed starters under manager Mikel Arteta.

Satriano’s immediate plans are to succeed with the Nerazzurri but may be tempted to consider a new challenge if Conte remains reluctant to hand him his senior debut.

In other news, Gunners midfielder Granit Xhaka has heaped praise on his teammate ahead of the Europa League tie against Benfica.