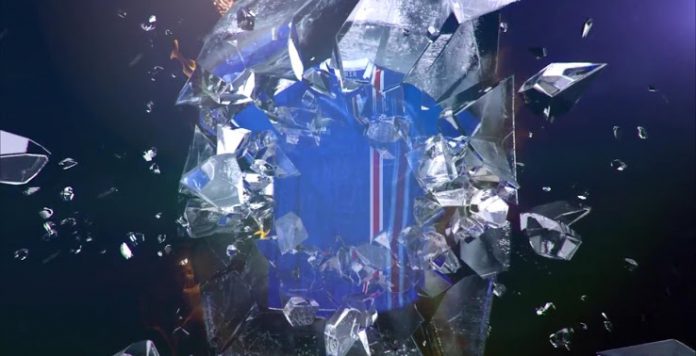 The Iceland Euro 2016 kits will be worn at Iceland’s first-ever participation in Euro competitions.

The kit boasts of a modern design in the colors of the Icelandic flag, blue, white and red and it has been manufactured by Italian brand Errea.

The Iceland 2016 hone kit is predominantly dark blue with white sleeve cuffs. On the left side of the Euro 16 home shirt, three parallel strips of alternate white and red colour runs down from the shoulder to the bottom.

On the right hand side, the manufacturer’s logo Errea, who has been Iceland’s kit supplier since 2004, is found on the chest.

A Prussian blue stripe borders the v-shaped collar of the Hungary 2016 Euro jersey while the inside of the shirt reads ‘Fyrir Island’ in large white letters.

Blue shorts and socks complement the Euro 16 home kit and gives an all-blue look. The Icelandic flag is placed on the upper back below the neckline.

The Iceland 2016 away kit is mainly white with red and blue details. Two blue, two white and a broad red strip runs down on the left side of the Iceland Euro 2016 away jersey.