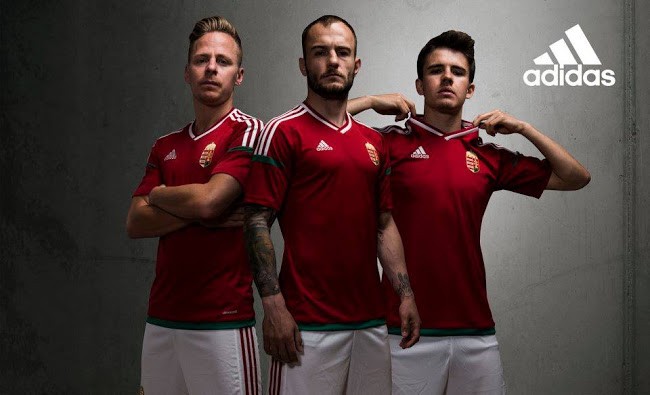 Hungary have qualified for the UEFA Championships for the first time since 1972. They are pitted in Group F of Euro 2016 in France and will face Austria, Iceland and Portugal in group stages.

The Hungary Euro 2016 home jersey is centred on a more traditional design and will be unveiled later this month on the team’s friendly game against Croatia.

The home kit boasts a simple design combining the famous tri-colour of red, green and white. The 2016 Euro home shirt is brick red in colour with Adidas logo being placed on the lefthand side and the country’s crest on the right hand side.

The collar is of a overlapping v-shaped style with iconic Adidas stripes running down upto the mid shoulders. A patch of green strip is observed on both sleeves and at the bottom of the shirt.

The Hungary 2016 Euro away kit is pure white with green and red details. The stripes on the sleeves are green, while the collar is identical to that of the home shirt.

White shorts and socks are set to complete the fresh new look of the Hungary Euro 2016 away kit.