Yesterday was a mixed sort of day for the Arsenal fans. The Gunners were in the market to sign one striker and a defensive midfielder. They were linked with plethora of top players, but in the end, with time almost running out, the Gunners signed Danny Welbeck from Manchester United.

Reports emerged last night that Arsenal had made a late attempt to sign Portugal midfielder William Carvalho. The highly rated Sporting midfielder, who has a reported release clause of €45m was also a target of Manchester United, the Red Devils did make a bid for them yesterday as claimed by O Jogo.

Sporting initially demanded that any potential buyer will have to activate the player’s release clause but knowing that European heavyweights would be reluctant to pay that price, they were willing to lower it down to around €30-35m. 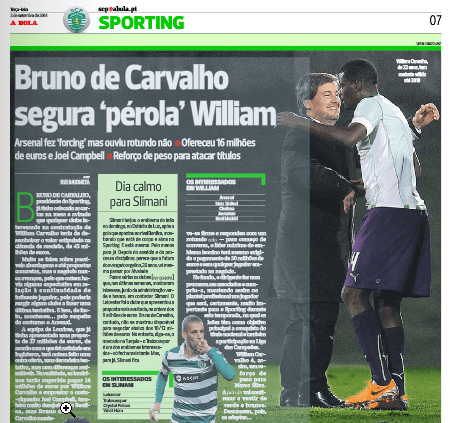 Arsenal had been showing great interest in him and lodged two bids last month, both been rebuffed. Sporting are a typical selling club like other Portugal clubs and naturally they would want to get maximum profit out of any transfers.

But there is this problem of third party ownership that restricts them from getting the full transfer value out of any deal. In case of Carvalho, they only own 60% of the player’s economic rights. They had rejected both offers of Arsenal before because the Gunners were willing to pay that amount in two instalments which would leave them with no benefit whatsoever.

They made that clear that any potential buyer will need to pay the negotiable amount directly. Last night Arsenal had lodged another bid for him, but the offer was not again up to their liking. The Gunners tabled an offer of €16m plus Joel Campbell on loan for Carvalho.

First of all, 60% of €16m would fetch Sporting only €9.6m. Plus, a player on loan who they do not need and will have to pay the wages would leave them with a huge transfer disaster. Sporting rejected the offer immediately which was a sensible decision. Arsenal had this good chance to sign one of the highly talented defensive midfielder in the world on the deadline day, yet they missed that opportunity!