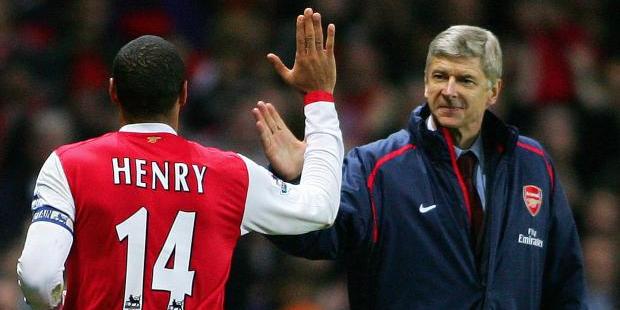 Arsenal legend Thierry Henry is about to start his new career as a football analyst, when he will make his debut for Sky Sports during Arsenal’s Premier League match away to Manchester City on Sunday.

The ‘King’ has branded Arsenal supporters, who are critical of manager Arsene Wenger as ‘joke’ and described the protest as an “out of order”, per Matt Hughes of The Times.

The former France international is the club’s all time record goal scorer and is adored by the fans and football lovers in general. Henry, who has expressed his desire to become a manager someday, is fully behind the long-serving Gunners’ manager Wenger.

Wenger has come under criticisms from Arsenal fans time to time, either for not spending enough money, or failing to win silverwares or overall bad performances, but the Frenchman never faced hostility among the fans towards him in his long career. However, recently, few Arsenal fans barracked him at Stoke City train station after Arsenal’s defeat last month at the Britannia Stadium, an act which Henry has strongly condemned.

“You can express that you are upset, but to do it in that way was a bit too much. But in the game at the moment unfortunately that is the way it is.”

Since that defeat against Stoke, Arsenal have managed six victories in last eight games, drawing one and losing another. The recent good run of form have taken them closer to top four, with new Alexis Sanchez firing all cylinders. Henry has heaved praise on Sanchez and says the Chilean has been Wenger’s best signing since he left the club eight years ago.

“That goes without saying now,” Henry said. “Arsenal were looking for a player like that who can deliver on a daily basis and they have found one. Sánchez is brilliant — he has a high workrate and vision, he can see the game incredibly as you saw with the goal on Sunday. He scores goals and doesn’t need a lot of opportunities to put the ball in back of the net.

“He is a very, very good player and you know that if he is in tune then Arsenal have a lot of chances to win the game. It is still early days, but so far it is very good. He is doing extremely well. He is going to score goals, but it is his all-round game that I am so impressed with. That has no price. As a fan — any Arsenal fan — I was waiting to have a player like that. Finally we have one.”

Henry has also praised Liverpool’s skipper Steven Gerrard, who will leave the club at the end of the season, to join La Galaxy.

“He is clever enough to adapt over there, and will arrive in a team that is already in tune,” Henry said. “LA have either been winning or losing in the final every single year so they are a very good organisation. As a midfielder he was for me — along with Paul Scholes — unstoppable. I would have loved to have played alongside him.”

Henry has spent the past four seasons playing for New York Red Bulls and believes Gerrard has the ability to thrive in the MLS.