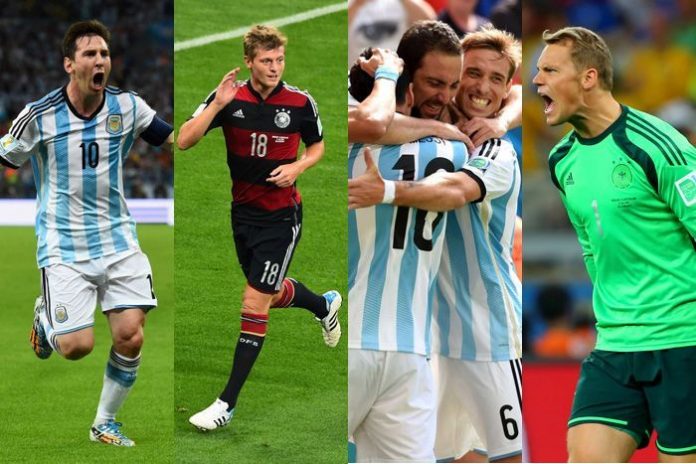 We’ve heard a lot in the last few days about this year’s World Cup final at the Maracana being a rematch of the finals of 1986 and 1990.

But we are a world away from the last time Germany and Argentina met in a competitive match – at the 2010 World Cup in South Africa, in a highly anticipated and supposedly competitive quarterfinal.

Germany and Argentina both rolled on top form. Diego Maradona’s Argentines were undefeated, rolling up easy wins in their first four games and smashing the previous record for coaching staff group body hugs.

Yeah – Maradona was doing just okay. His Argentina team, however flimsily, was playing with real verve. Gonzalo Higuain couldn’t stop scoring, Carlos Tevez was on fire too, and while Lionel Messi wasn’t firing, it wasn’t anything to be too concerned about.

Germany, meanwhile, were a young machine that had just rolled over England 4-1. You know the names: Klose, Khedira, Muller, Podolski, Schweinsteiger, Lahm, and Neuer, led by Low.

What happened in Cape Town was nothing short of a massacre. Germany scored at the very beginning, and topped off a 4-0 thrashing with a goal at the very end.

Argentina were naive and unaware, and Germany ran rampant.

Sound familiar? Yep, that game bore a lot of similarities to Germany’s 7-1 beat-down of Brazil in the semifinal last Tuesday. If the quarterfinal four years ago was a window into the true potential of this German golden generation, the game against Brazil was perhaps the peak of its maturation.

Germany can be that good. Meanwhile, Maradona was ridiculed, and Argentina went back to the drawing board.

Perhaps that’s why the Germany who trots into this final is the same one we knew in South Africa, just four years older, while Argentina bare little resemblance to the free-flowing side that crashed out in 2010.

Maradona has been replaced with Alejandro Sabella, a pragmatist who is rarely described as brilliant, and more frequently derided as a comical figure on the sideline – fairly or not.

In the end, it wasn’t Lionel Messi who dragged Argentina through their World Cup Semifinal with the Netherlands.

Argentina has come a long way. Their route to the World Cup Final, much like their semifinal against Holland, was a nervy, unconvincing, at times unwatchable journey that saw Sabella’s team win each of their first five games against Bosnia and Herzegovina, Iran, Nigeria, Switzerland and Belgium by a solitary goal before beating the Dutch on penalties.

Do Argentina deserve to be here? Probably – but this isn’t a team that inspires much confidence. They needed Messi magic in stoppage time to beat Iran, and Messi magic in the 118th minute versus Switzerland as well.

Angel Di Maria is out, Sergio Aguero is barley fit, and Argentina still don’t have a soccer identity that doesn’t fade into, “Let Messi Do His Thing.”

What is the Argentine story at this tournament? It’s hard to say. In the knockout stages, defense has been the real star. Considering Messi hasn’t scored since the last group game, a collection of players including Federico Fernandez, Martin Demichelis, Ezequiel Garay, Marcus Rojo, Pablo Zabaleta, and Jose Maria Basanta may just be the real heroes.

It is an Argentine 180 from 2010, a rebirth that has made the team overly reliant on Messi. But it has worked so far. Does it have one win left?

For Germany, this campaign is just a continuation of process that saw them come up short in the semifinal or final of the last four major tournaments, and especially in the post-Michael Ballack era, the last two major tournaments.

Germany are mature, and due. They’re the best footballing team of any side in the world right now, the bookmakers’ favourites as per World-Cup-Betting.me.uk and everyyone else, with the most talent, and the best team unity.

The only thing holding Germany back in this tournament was Jochiem Low playing Phillip Lahm in the midfield, a totally nonsensical decision that overcomplicated the first four games of the World Cup.

But in the quarterfinal against France, Lahm was moved back to fullback, Schweinsteiger and Khedira were restored in the midfield, Miroslav Klose played up top, and the Germans were off to the races.

Their performance against Brazil was nothing short of staggering – a mechanical, mechanical demolition of a host nation frenzied in its fear and unable to stem the tide of the Germans after the second goal from Klose.

Brazil – all emotion, no plan – were ripped apart.

Will Argentina complete a remarkable and slightly inexplicable run to the title, or will Germany finally realize their unlimited potential?