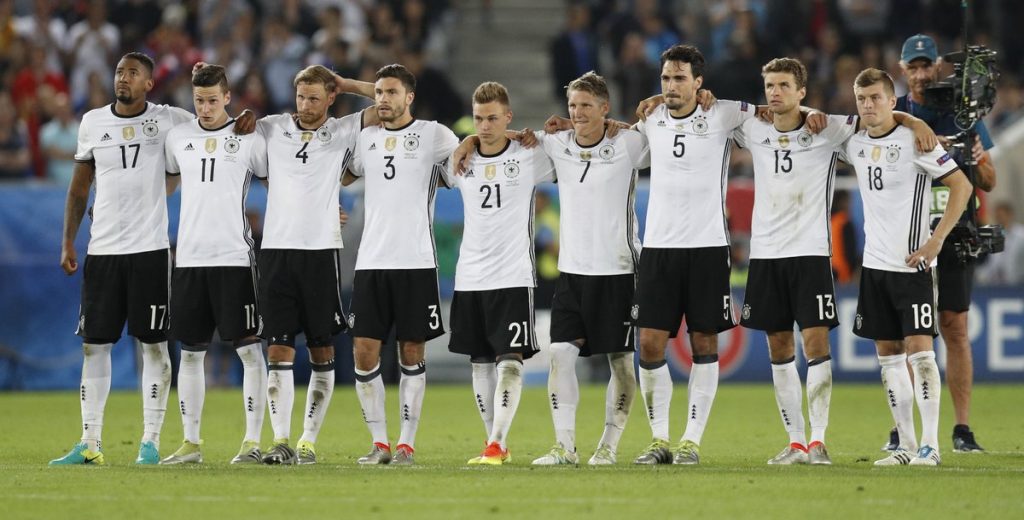 Jonas Hector scored the winning goal as Germany beat Italy 6-5 on penalties to book a place in the semi-final of Euro 2016.

Germany boss Joachim Low made one tactical change; he switched to a 3-5-2 formation with Howedes replacing Julian Draxler in the starting lineup. For Italy, Daniele De Rossi failed to make it to the starting XI, with Stefano Sturaro replacing him in the midfield.

After a cagey opening 14 minutes, with both sides cancelling each other out, Italy had their first real shot on target. Florenzi received a pass from the right after a nice exchange of passes in the middle; he made room by cutting inside but didn’t get enough power on his shot at the near post.

Germany were forced to make an early change as early within 15 minutes; Bastian Schweinsteiger replaced Sami Khedira, who seemed to pick up a thigh injury.

The 3-5-2 formation used by Germany saw Boateng and Hummels getting in space and could bring the ball forward. Hummels picked up Gomez in the box with a brilliant long ball delivered at the right length and height, but at full stretch, he couldn’t keep it under control.

From a dangerous looking attack, Schweinsteiger had put the ball in the back of the net, but it was disallowed for a shove on De Sciglio. Moments later Parolo made a brilliant tackle on Muller preventing a dangerous German counterattack.

What I absolutely love about proper Italian defenders is that dogged desire to not give a player an inch, looking to get anything on it.

Germany created a decent half chance when Kimmich crossed from the right, but Mario Gomez nodded over the bar. Moments later, Germany had another good attempt with three shots in a row inside the box, but eventually, the ball ballooned safely into the gloves of Buffon.

The best chance of the first half, however, fell to Italy. Giaccherini rushed towards the penalty area from the left and kept it in play but nobody was on the end of his cross from seven yards; Sturaro from outside the box took the shot but it deflected narrowly wide off Boateng.

Germany started the second half lively, with Thomas Muller came close to giving his side the lead. The Bayern star got round Chiellini and took a brilliant shot with his left foot but Florenzi produced a great goal-line clearance with his heel.

Italy went into a defensive shell and after applying loads of pressure the Germans finally broke the deadlock through Arsenal superstar Mesut Ozil. Gomez played a defence-splitting pass to onrushing Hector down the German left, his pull-back took a deflection and fell kindly onto the path Ozil who scored with a gentle tap in.

Moments later, Germany came close again, this time, Ozil picked Gomez inside the Italian penalty box with a sublime chip, but Buffon produced an amazing reaction save from point-blank range to deny the German striker.

Just when it looked like Italy were running out of ideas, they were given a lifeline after Jerome Boateng made a silly handball inside the box and the referee eagle-eyed to point to the spot. Leonardo Bonucci, who is a reported £32m target for Chelsea, placed his penalty kick nicely into the bottom corner. Neuer guessed the right angle, but he couldn’t get there.

Julain Draxler nearly scored for the Germans in the second half of the extra time; his overhead kick from six yards out just went over the bar.

In the penalty shootout, Mesut Ozil and Bastian Schweinsteiger missed from their spot kick, while Manchester United defender Matteo Darmian failed to convert his shot on goal. In the end, despite a brave fight from Italy, the Germans held their nerves to win 6-5 on penalties. They will face the winner of either France or Iceland in their next match.