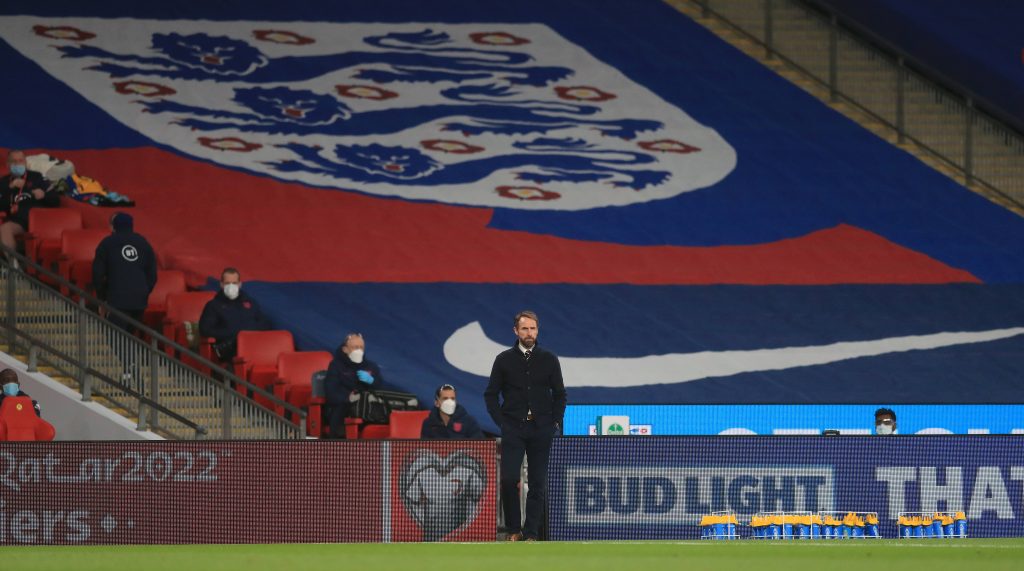 They agreed on 20 of the 23 players while also discussing their inclusion of Liverpool man Trent Alexander-Arnold.

Carragher: “Grealish is going. He has to go. What he did in the games he was playing before Christmas, certainly the game away in Belgium I think he was a real standout player.

“I think he’s a special talent. There’s no doubt in my mind that Grealish doesn’t go.”

“I think he did enough in those games in November, and I would definitely take him.”

Neville: “He plays the position really well in that midfield two alongside Rice.

“What Gareth [Southgate] has been really good at is that he’s played players who are in form and in position. He picks players who have done well for him for England.

“There are very few players who play better for England than they do for their clubs. Someone like a Kalvin Phillips replicates his club form for England.

“Some players really adapt well to international football in England. I think Kalvin Phillips has adapted well, he plays the position well, and he does what Gareth Southgate wants.”

“I see Calvert-Lewin as somebody who is, against a top team, half an hour to go, we’re 1-0 up, to run the line, run them ragged, close down, harass, potentially get a goal. But I think his finishing is a little bit erratic.

“I think he’s exceptional. I’d try to work a way to get him into the squad in case Kane got injured because I don’t think there’s a natural replacement for Kane in terms of finishing. I think Greenwood’s the only one that can really finish.”

Carragher: “He’s playing for Borussia Dortmund in the Champions League, and I think he’s gonna be a star of the future for England.

“I think he’s one of them that maybe won’t be involved as much. You’re almost putting him in the squad for the future. Not to say he’s not good enough, by the way.

“He’s a special talent, and I think he’s definitely one to take.”

Carragher: “You want Trent Alexander-Arnold in that position where I think only Kevin De Bruyne is better than him in world football. Whether that’s at wing-back, right-back, or right of a midfield three.

“Get him in that role on the ball. Ask Harry Kane who he’d want on the ball there. He’d want him there before any other England player.

“I think there could be a case that Trent [Alexander-Arnold] could come from the bench as a midfield player if England needed a goal. I’d rather have him on the ball than maybe Ward-Prowse in that position.

“He’s won the Champions League. So this thing that he couldn’t play (against the top players) is nonsense.”

Neville: “When he plays for Liverpool, they have 65% possession in most games. They play a certain way, and he’s got world-class players like Salah and Mane around him.

“If England are gonna win this tournament, it will be a more pragmatic style where they’ll have less of the ball, which means they will have to defend more.

“The idea that Trent Alexander-Arnold can play the same way for England when he’s basically gonna have 35, 40% possession against a Belgium, versus playing with 60% possession for Liverpool, is just a nonsense. Gareth has got different needs and ways to win this tournament.

“Ward-Prowse is outstanding in that area. He plays naturally in that area, Gareth’s had him in the under-21s, he trusts him, he knows that he’ll get into that right channel naturally, and he’s a brilliant crosser of a ball.

“If you said to me: who would I trust more to play on the right of a three in midfield in the last 20 minutes of a game? Ward-Prowse plays there, and Gareth will trust Ward-Prowse rather than Trent Alexander-Arnold.

“His delivery is exceptional, on set pieces and in open play. That’s why I put Ward-Prowse in to deal with the area that he’s (Carragher) just talked about with Trent Alexander-Arnold.”

Carragher: “Jadon Sancho is playing at a really high level, and his numbers are off the scale. I’ve just never been fully convinced in an England shirt yet.

“And I just think, with the emergence of Phil Foden and Jack Grealish as part of the front three, someone had to miss out. I think he misses out.”

“Don’t try to pinch a position. Honestly, it will bite you like you wouldn’t believe.

“Let’s say, for instance, there’s a brilliant right-winger that’s gonna play against us at some point in the tournament – which there will be – and Saka’s left-back.

“We’re gonna have to get through these games against the top opposition by having less of the ball. I just think that having a defender that’s not a defender most of the time is not something that Gareth’s gonna do. He’s not gonna take that risk.”

Carragher: “I wanted him to be in it. At first, I had him in ahead of Chilwell.

“I was thinking: ‘if Shaw got injured in that first game, would you really want him (Saka) as a left-back in a back four?’ I maybe went with the safe option in terms of Chilwell playing that role.”

Carragher: “I just thought with Mount, Foden, and Grealish, not exactly the same but those types of players. Lingard is probably slightly different, maybe they’re all similar, but I just couldn’t leave one of those out.”

Neville: “With Lingard, I came to the same conclusion (as Carragher). If you’ve got Mount, Grealish, Sterling, Foden – You’ve got enough players who can play in that connection position.”