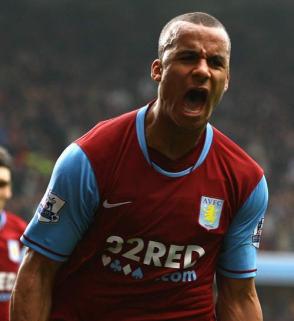 Former Aston Villa striker Gabriel Agbonlahor has revealed that he turned down a chance to join Tottenham Hotspur in 2010-11 and West Bromwich Albion in 2016 in order to remain at Villa Park.

The former England international spent 13 seasons as a pro at his boyhood club, scoring 86 goals in 391 appearances for the Villans before hanging up the boots last year.

Harry Redknapp was keen to bring him to Spurs, but Agbonlahor felt joining the North London club wouldn’t be a step up at the time, and with four other strikers to compete with for regular playing time, he didn’t see the need to leave the Midlands.

“There were serious options about moving at various times. It was the season that Martin O’Neill left when Spurs came in for me. I discussed it with my agent and we agreed that Spurs were a big club. But it didn’t feel right. I was in the Villa team every week, getting into the England squad and it’s my home team who I supported,” the former striker told The Athletic.

West Brom came knocking following Villa’s relegation from the top-flight at the end of the 2015-16 campaign, but Agbonlahor wasn’t ready to leave either despite some section of the fans falling out with him.

“I was going through a rough time at Villa and even though some of the Villa fans had turned against me, it was just something that I couldn’t do.
Pulis and his assistant wanted me to go there. Craig Gardner was there, too. I didn’t fancy it. They were one of my biggest rivals and I have scored so many times against them. Their fans didn’t like me, either, and even though it wasn’t going well at Villa, I just couldn’t move so that one was cancelled too.”

The 33-year-old is Villa’s record Premier League scorer with 75 goals, and he left the club at the end of the 2017-18 season after his contract was not renewed, ending a 17-year association with his hometown club.