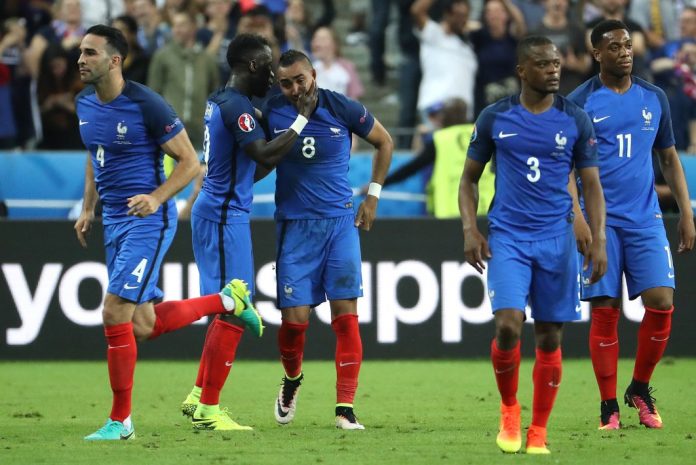 France open their Euro 2016 campaign with a dramatic 2-1 victory over Romania at Stade de France in Saint-Denis on Friday night. It was the first time since Euro 2000 that the host nation won the opening game, thanks to a late stunning goal from West Ham forward Dimitri Payet.

Despite a blitzkrieg of an opening start, both teams squandered few excellent goal scoring opportunities, with the scoreline remaining 0-0 at half time.

After the break, Arsenal striker Olivier Giroud gave France the lead with a fine header in the 57th min, meeting a lovely floating cross from Dimitri Payet, although the Romanian goalkeeper was largely at fault for his poor effort in thwarting away the danger.

Romania, who are known for their strong defensive style of play, put men forward in search of an equaliser and got their goal eight minutes later, with Bogdan Stancu tucking away a penalty after Nicolae Stanciu was tripped by Patrice Evra in the box.

Just when it seemed like the visitors would claim a draw, Payet produced a moment of individual brilliance and scored a sensational goal with his weaker foot, curling the ball into the top corner four minutes from time. He created eight-goal scoring chances for France on the night as well.

Payet got bit emotional when he was withdrawn in the dying minutes of the match and was seen crying as he left the pitch.

Payet crying at the fact he’ll be going back to playing with player like Mark Noble after the Euros pic.twitter.com/LnZipiHUV0

Chelsea superstar Eden Hazard was quick to express his reaction to Payet’s goal. He tweeted this after France secured full three points in their opening game.