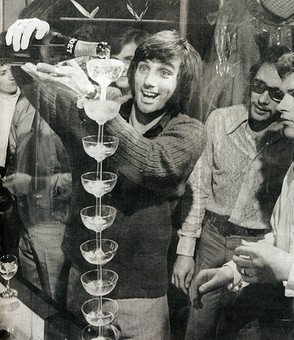 The 1960s just might be football’s golden decade. George Best, Garrincha, Pele in his prime and much much more. Recently on the Total Soccer Show podcast, we picked our starting XI from the 1960s. None of of us were alive back then, but thanks to television, YouTube and brilliant books like Jonathan Wilson’s Inverting the Pyramid, we were able to weigh the various options at each position and argue out the perfect starting XI to represent 10 of the most glorious years in the history of the beautiful game.

Listen to the show to hear how we arrived at our unbeatable lineup, or read about the starting XI below:

Goalkeeper: Lev Yashin
Dynamo Moscow and Russia
Who else? Gordon Banks might have won the World Cup, but Yashin is still talked about as probably the greatest goalkeeper of all time. “The Black Spider” wore leather gloves and a cloth cap, but he invented modern goalkeeping by yelling at his defenders to get them organized and coming out of his box to use his feet as the first sweeper-keeper. Still need convincing? Yashin apparently made over 150 penalty saves in his career.

Right back: Djalma Santos
Palmeiras and Brazil
The right back spot was a choice between two Brazilans. Though Carlos Alberto Torres would captain the 1970 World Cup-winning team, Santos was chosen for both the ’62 and ’66 tournaments, and provided the assist for Vava in the 1962 World Cup final by crossing a high ball into the glare of the sun. Not as adventurous as later Brazilian right backs (including Carlos Alberto) but gets the nod for defensive solidity. And a scary photo.

Left back: Giacinto Facchetti
Inter and Italy
The 6′ 3″ Facchetti played left back in the catenaccio-loving La Grande Inter team of the ’60s, which won multiple Italian titles and back-to-back European Cups. But though he could definitely defend, Facchetti was actually the key to Inter’s killer defence to attack transitions. Inter played a sweeper, two marking centre back, and a right back, but Facchetti had the entire left flank to himself and would bomb forward, cut inside and shoot with his right foot, basically inventing the European attacking fullback.

Centre back: Bobby Moore
West Ham and England
As the Total Soccer Show‘s sole Englishman, I thought I’d be the only one selecting England’s 1966 World Cup-winning captain. Turns out I wasn’t. Moore’s composed defending is famous worldwide, because very few have made relieving opponents of the ball look so simple and then strolling up field with it look so easy. Moore had a great run in the mid-’60s, winning the FA Cup in ’64, the European Cup Winners Cup (bring it back!) in ’65 and then the World Cup in ’66. That, plus England have not had a defender who can successfully pass the ball out of the back since.

Centre back: Bill McNeill
Celtic and Scotland
The Lisbon Lions had to be represented here, so Celtics’s 1967 European Cup-winning captain would be the stopper in our lineup. Billy McNeill, or “Cesar” to Celtic fans, was a hard man, a leader and a never let you down defender, meeting every high ball with his head, intercepting every pass and stopping every attacker in his tracks by getting a well timed foot-in. McNeill and Bobby Moore will have to argue over the captain’s armband in this team, but either man will do a fine job.

Box-to-box midfielder: Josef Masopust
Dukla Prague and Czechoslovakia
There isn’t a lot of footage of Masopust, so his selection is based on what we’ve read and the very little YouTube we’ve seen. But from everything we’ve heard and read, Masopust could defend and attack, would happily cover the length of the field several times over, and was instrumental in leading Czechoslovakia all the way the 1962 World Cup final. We also felt that any Team of the ’60s should represent the incredible talent of the Soviet nations in that decade.

Attacking midfielder: Bobby Charlton
Manchester United and England
Imagine Frank Lampard in his prime. Now imagine him about five times better at absolutely everything. Now give him a silly haircut. That’s Bobby Charlton, who could pick up the ball from anywhere, carry it forward at pace by dribbling with either foot, and then unleash an powerful, laser-guided strike into the top corner, again with either foot. And that’s how Bobby Charlton is England’s all-time top scorer despite not actually being a striker.

Right wing: Garrincha
Botafogo and Brazil
“The Joy of the People” was a terrible, terrible professional footballer. Fond of a drink and unable to absorb any tactical information—legend has it he was allowed to play table tennis while the rest of the team talked tactics. But it didn’t matter. Because the bendy-legged winger (bendy-legged due to childhood polio) literally went past fullbacks for fun. So much so, he’d sometimes wait and let them recover, just so he could beat them again. Brazil never lost a game when fielding Pele and Garrincha, so any respectable Team of the ’60s should do the same.

Left wing: George Best
Manchester United and Northern Ireland
We know, Best was mostly a right winger and shouldn’t be pushed out to the left. But we couldn’t have a team of the ’60s without Garrincha and we couldn’t have a team of the ’60s without the magician that was George Best. So we compromised. Best’s career tailed off in the ’70s, but the ’60s were Best’s decade: the fame, the female company and—most importantly for this list—the football. Possibly the best way to describe Best going forward with the ball is “justified arrogance”, which is what gave him license to do things no one else thought of doing, like playing one-twos off opposition defender’s shins.

Support striker: Pele
Santos and Brazil
You may have heard of him. Pele introduced himself to the world as a teenage sensation in 1958 and reached apotheosis at the 1970 World Cup, but “O Rei” actually did all his best work inbetween, in the 1960s. Pele won the Copa Libertadores and Intercontintental Cup with the legendary 1962 Santos team, won the ’62 World Cup with Brazil and was considered so dangerous in the ’66 World Cup that the only solution for Portugal was to kick him, hard, until he left the field injured. Want to hear about Pele the player? They key is not to think of him as just a striker, because he could also drop deep and create. But it’s impossible to pick one attribute because Pele could do it all, and he did it best in the 1960s.

Striker: Eusebio
Benfica and Portugal
Only a little fella’, but 5′ 9″ Eusebio was built like a bulldozer. You could not muscle him off the ball. Add to that a fine touch, a nose for goal and the only shot in the world that could rival Bobby Charlton’s for power and accuracy (would love to see a long distance shootout between those two!) and it’s crystal clear why Eusebio was a European Cup-winner with Benfica in 1962 and the top scorer at the 1966 World Cup with nine goals. His partnership with Pele—supplied by Garrincha and George Best—wouldn’t just be the greatest attacking lineup of the ’60s, it might be the greatest, and most entertaining, of all time.

Find out more about these players, and the players that just missed out: Play/Download MP3.
Like what you hear? Subscribe to the Total Soccer Show podcast via iTunes or subscribe via RSS.