The 2014-15 Deloitte Football Money League features nine clubs from the Premier League – the most from any country in Europe.

Real Madrid once again claim the #1 position, but Manchester United could dethrone Los Blancos next year for the first time in more than a decade according to Deloitte’s financial projections.

The absence from European football resulted in 21% decrease in broadcasting revenues. The match day revenue has also dropped (17%) considerably, with United hosting 21 matches in 2014/15 compared to 28 the year before. The total revenue fell by £38m (9%). 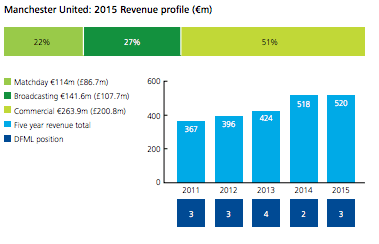 However, the commercial revenue grew by £7.8m (4%) and it will increase even further, with the record £750m-adidas kit deal starting this season.

City becomes the second English club ever to break the £350m revenue barrier. 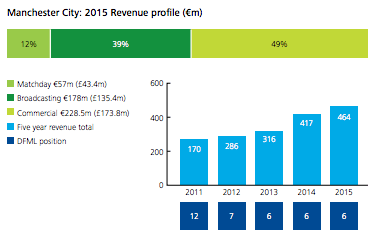 However, the scenario is expected to change next season, following the addition of 7,000 more seats at the Etihad. So far, all 2015/16 home league fixtures have attracted attendances in excess of 53,000.

City are planning to increase capacity to 61,000 in the future, and should the plan go through, the Etihad Stadium could become the second largest English club stadium behind Manchester United’s Old Trafford.

Both the broadcasting revenue and the commercial revenue have increased, and all City need now is a successful Champions League run in 2015/16 to provide the revenue boost required to break into the top five in the money league table.

A significant 10% (£30.8m) improvement in revenue has helped the Gunners to leapfrog local rivals Chelsea into seventh. 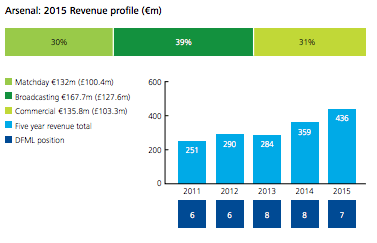 Also, Arsenal recorded the highest match day revenue (£100.4m) of any Money League club despite them playing two fewer home games than in the previous season.

Broadcast revenue has improved marginally in 2014/15, and it is one sector where there is a huge scope for growth, provided Arsenal can progress beyond the Round of 16 in the Champions League.

The 2014/15 season was a highly successful one for Chelsea, as they won the Premier League title with three games to spare, as well as securing the League Cup. 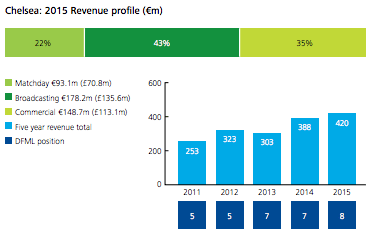 Despite excellent on-pitch performances, Chelsea’s total revenue marginally fell from £324.4m to £319.5m (2%), resulting in a demotion of one place to eighth in the Money League.

The commercial revenue remain largely unchanged, but the broadcasting revenue dropped slightly due to an early elimination in the Champions League Round of 16.

Liverpool are at #9 following a 17% overall increase in revenue. 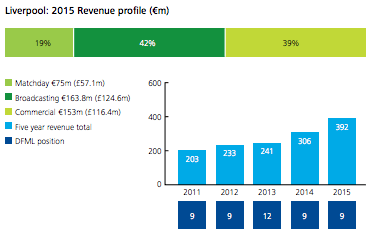 The Reds are expecting a significant increase in match day revenue when the Anfield reconstruction work is completed during the 2016-17 season, with seating capacity set to increase to 54,000.

Liverpool’s broadcast revenue increased due to the participation in the Champions League, but at the same time they saw a decrease in Premier League receipts of £4.7m due to a lower league position. 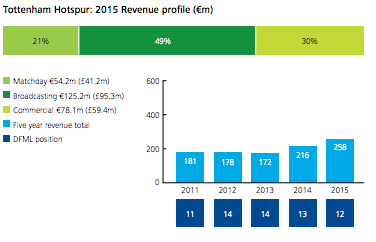 Spurs made good progress in 2014/15 season both on and off the pitch. Their total revenue grew by 9%, while they made significant progress on their new stadium project.

The broadcast and match day revenue remain unchanged, but there has been a significant 38% uplift in commercial revenue.

Newcastle endured a run of eight consecutive defeats from March onwards, their worst run in Premier League history, and just managed to avoid relegation on the final day of the season. 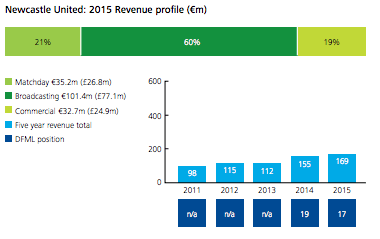 Although the Magpies reaped the benefits of the current Premier League broadcast deal, with a substantial 60% of revenue being generated from centralised broadcast payments, there has been a marginal drop in the commercial revenue.

Newcastle have a loyal fan base, and it has been reflected on the revenue earned from match days, which grew by €0.9m, despite the disappointing on-pitch performance.

Everton progressed to the last 16 in the Europa League, but their 2014/15 league campaign was disappointing. They finished 11th in the Premier League, the club’s lowest place since 2005/06, and were eliminated early from domestic cup competitions.

A relatively good run in the Europa League campaign meant that Everton enjoyed a 7% increase in match day revenue. 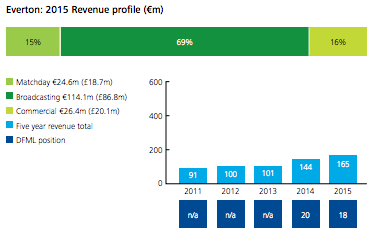 The bulk of their income has come from broadcasting rights, which accounts for 69% of the total income after an increase of £2m to £86.8m.

Everton need to expand their commercial branding as they continue to generate the lowest commercial revenue in the Money League top 20 despite 10% growth to £20.1m (€26.4m). 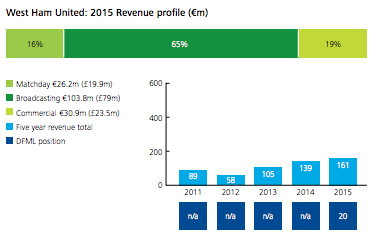 The commercial revenue has grown from £21.6m to £23.5m (9%), with West Ham securing the club’s biggest ever commercial deal with Betway.

The majority of the total increase in revenue was attributable to broadcast revenue, which rose £3.6m to £79m, and represented 65% of the club’s total revenue.