How to beat Chelsea; How to beat Arsenal; How to stifle Liverpool: last week’s games taught us some crucial facts about the tactical models needed to break down the Premier League’s top clubs. From high pressing systems to burgeoning short passing philosophies, we learnt an awful lot at the weekend.

1) How to beat Chelsea; utilise an anchor-man and narrow the pitch.

The mystified shrugs of Jose Mourinho in his post-match interview were perhaps the greatest compliment Newcastle United’s defenders could have received, but in truth, Chelsea’s frustrated attempts to score are perfectly explainable.

Mimicking the Testudo-style tactical model Sunderland had employed in their nullification of Chelsea, Pardew’s side wilfully sacrificed the vast majority of possession – and space – to the opposition, relying upon deep, narrow, and compact lines of defence.

This is because, despite the complexly unpredictable spread of Chelsea’s midfield creativity, a significant proportion of their attacking flair is initiated in central areas, where their inverted wingers are inclined to drift. Using Sunderland’s policy at The Stadium of Light as a blueprint, Newcastle narrowed the pitch, stifling Hazard and Fabregas by placing two central midfielders in anchor positions. 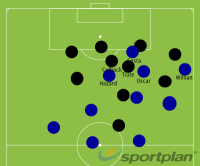 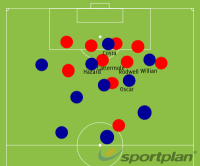 The message is clear: Chelsea struggle to create goalscoring opportunities when operating within a tightly congested central area: the main focal point of their attacks this season. If you limit space in this area, and sit in deep, compact rows, then Chelsea are – with a bit of luck – beatable.

2) How to beat Arsenal: crosses into the box

Stoke City’s three goals not only reopened debates regarding Arsenal’s defensive fragility, but also offered a compelling theory as to how other teams may exploit a side that had, until now, shown tentative signs of progression.

All three of Stoke’s goals resulted from crosses into the box, extending an abysmal defensive record from aerial threats; Arsenal have conceded from crosses on 11 occasions in the league this season, 61% of their total goals against.

Of particular concern to Arsenal is Koscielny (50% of aerial challenges won) and Keiran Gibbs (35% won), who are both regularly beaten in the air. Future opponents should take note of Arsenal’s Achilles’ heel, and field strong, tall attackers; Peter Crouch’s aerial threat – both when receiving the ball and by distracting others – was menacing all afternoon, as Stoke City bombarded Arsenal from the wings. 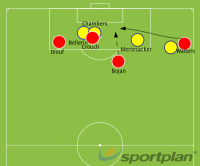 Particularly when travelling to the Emirates, a direct playing style is a tactical necessity against a very beatable Arsenal side. Shifting the ball quickly into wide areas and crossing into the box is, by some distance, the best way to score against them.

3) How to stifle Liverpool; a high pressing game

Considerably shaken by the creative void that hangs over Anfield, Liverpool’s confidence is in rapid decline, a fact opposing teams are increasingly learning to exploit; on Saturday, Sunderland pounced upon Liverpool’s nervousness with a high pressing system, breaking up their passing and forcing numerous mistakes.

In recent matches Liverpool’s composure in possession has suffered dramatically, and Poyet’s well organised midfield trio – led by the tireless hounding of Liam Bridcutt (7 interceptions) – certainly exploited this, forcing Liverpool into a familiarly disjointed performance, in which Henderson (78% pass completion) and Lallana (62.5%) struggled to make an impact.

Alongside this quick, dogged defensive display, Sunderland also successfully man-marked Raheem Sterling, who – shouldering the vast majority of the creative burden in the absence of Luis Suarez’s slinking runs – is by some distance Liverpool’s most dangerous player.

After Steven Gerrard’s introduction provided some assured distribution at the heart of midfield Sterling began to find pockets of space, but for the opening 66 minutes, he was persistently drowned out by the outstanding Seb Larsson, snapping at his heels as an extra defender. 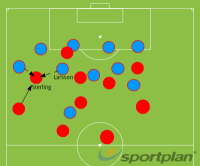 Sterling was pincered on numerous occasions, with Larsson providing the secondary support.

Liverpool can be comfortably stifled by teams that employ a high pressing system, denying their confidence-stricken midfielders time on the ball; get in their faces, and they will struggle to find a foothold in the game.

Casting aside the slick, silky football that has redefined West Ham this season, Sam Allardyce reverted back to the old-fashioned direct approach that has traditionally characterised his teams. It proved that, against technically gifted opposition unprepared for a highly physical game, West Ham have an excellent plan B.

Despite an increasing propensity to play more stylish football – led by Song’s patient distribution and the technical skill of Sakho and Valencia – West Ham’s central midfield does not contain enough technical skill to outmanoeuvre high pressing, short-passing opposition such as Swansea.

Hence the return of Andy Carroll, and although he was indisputably the game’s hero, it was Stewart Downing’s meandering runs and accurate crossing that allowed this system to flourish. Averaging 9 crosses per match, Downing regularly drifts across the opposition back four to provide the assist (6 so far) for a team-mate.

It was always likely that West Ham would become unstuck against more technically gifted opposition than themselves, but Allardyce has a rather simple trick up his sleeve. If you can’t out-pass the opposition midfield, bypass them instead.

5) Villa have the potential to become a good passing side

An absence of leadership and lack of technical composure is to blame for Aston Villa’s chronic self-esteem issues and the brutally demoralising performances in the league this season. But with the introduction of technically gifted centre-backs, and with Tom Cleverly and Carlos Sanchez finally settling down, Villa are beginning to show signs of being a controlled and composed passing unit.

Overcoming some initial teething problems, Tom Cleverly’s movement and incisive distribution – linking up well with a more assured Carlos Sanchez – allowed Villa to build attacks without feeling the need to aimlessly pump long balls forward; against Leicester, they held 65% possession and made 477 short passes. Seeing Benteke receive the ball to feet (6 aerial duels in total) and bring other attackers into the game was a breath of fresh air.

Furthermore, the introduction of Jores Okore – back from a 14 month lay-off to make his fifth appearance for the club – provided Villa with a technical composure in defence that proved vital to the performance as a whole.

Throughout the match, Okore’s superb tackles and interceptions were followed by incisive, intelligent passes that led to Villa counter-attacks. Considering the pace in Villa’s team, this could prove extremely valuable in the coming months.

If Lambert can keep up morale, there is no reason why Villa – with Benteke and N’Zogbia re-emerging as attacking threats – cannot clear the dark clouds hanging over Villa Park, and build towards a brighter future.