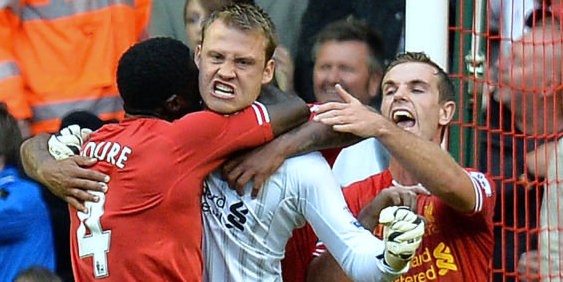 Whether you were watching it live in the stands, on the telly, catching an online stream or listening to live Premier League football commentary on talkSPORT, there’s no denying it – the most popular football league in the world is finally back. And back are the emotions – passion, debate, anger, agony, frustration, joy, celebration, victory, defeat – that, which makes it the best and the most popular league in the world.

Apart from Arsenal’s shambolic 3-1 defeat at the hands of Aston Villa at the Emirates, there were no such major hiccups elsewhere. Here are five observations from the first week of the Premier League.

A memorable week for the strikers

Strikers got into the act in the very first week only. We saw Daniel Sturridge scoring the only goal for Liverpool in the Reds 1-0 triumph over Stoke City, Ricky Lambert netting the winner against West Brom, Olivier Giroud opened his scoring account within first 10 minutes against Villa while Robin van Persie and Danny Welbeck both enjoyed a brace against Swansea.

Likewise, memorable week for the debutants

Swansea’s Wilfried Bony bagged a fine goal against the Champions, Simon Mignolet’s stunning save of Jon Walters’ penalty, Paulinho and Soldado had a solid debut with the latter getting his name on the score-sheet, Ricky van Wolfswinkel’s header earned Norwich 2-2 against Everton were some of the wonderful moments the debutants enjoyed in the opening week.

Manchester United weren’t that bad – were they?

The Champions having not made any major signings so far aren’t the favourites of the bookies to win the title again. Even not many football pundits have tipped them to win the league. The cynics had already harboured doubts over David Moyes’ caliber, while skepticism shudders even among his legion of admirers.

Well, he didn’t start that badly. Neither Manchester United. They were just a bit clinical and just did their usual job of scoring goals and winning games.

The only major talking point was Wayne Rooney’s alienation from the team celebration after the third goal, though very few talked about his contribution (assist) in the build-up to the fourth goal. Such is Football. Such is Life.

Refs are the easy targets as always

Dear Arsene – did you enjoy the spirit of your own team? And Home fans’ reception?

Likewise, this is what Ian Holloway had to say (about the controversial penalty) after Crystal Palace’s 1-0 defeat at Selhurst Park against Spurs.

“It was a decision before that, maybe I don’t understand what a free-kick is. When I was growing up my dad said you have got to be strong and you’ve got to body charge people. Then that was banned out of the game.

“A minute-and-a-half later is it deliberate hand-ball? I understand what they have said about making yourself bigger, but when you’re diving to the floor to try and block a cross, he’s half a yard away and you’ve got no time to get out of the way.”

Arsenal in some kind of trouble

Well, normally one shouldn’t judge or make any strong comments based on first week performances only. But, the situation of Arsenal is such that one cannot help but do so. Fans are not only furious but they feel the time has come where voices must be heard, questions need to be asked and answers need to be given. And the pantomime atmosphere can go acerbic if things continue like this, that is, Arsenal continue to suffer on pitch while Wenger is failing to recruit sufficiently, despite the money burning hole in the pocket.

It has reached a stage where their beloved manager is abused by the same people who loved him so dearly and the Supporters’ Trust has given an ultimatum to the board, saying “Enough is Enough.”