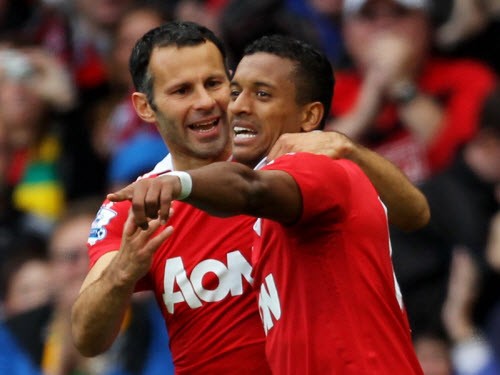 The international break is over and so both the Premier League and the Soccerlens Fantasy Football Game return to action this weekend. I’m on a roll, having won $25 prize money in week seven, and am all set to win some more in week eight. Hopefully.

One thing I’ve learned about the Soccerlens Fantasy Football Game is that assists are important. The points value of a goal varies by position, but assists are always worth three, and often come from unlikely sources. Like Stoke City’s left wing. So it’s worth seeing which Premier League players are the most generous. Read on to find out which 11 players have the most assists so far.

1. Nani, midfielder, Manchester United – 6 assists
Nani leads the league with six assists, but has has also scored twice himself, which adds up to an average of 5.7 points per game so far. Nani still isn’t Cristiano Ronaldo, but he’s the best performing Red Devil in the Soccerlens Fantasy Football Game. United play West Brom at home this weekend, and Nani looks your best bet for points in that game. Unless he misses another penalty.

2. Didier Drogba, striker, Chelsea – 5 assists
Drogba is impossible to leave out of your fantasy football team right now. As a striker the man’s job is to score goals, and he’s doing just fine in that department: joint top Premier League scorer with six strikes. But somehow Drogba has also found time to assist on five other Chelsea goals, so he’s a genuine double threat. The downside is that the majority of Soccerlens Fantasy Football managers pick Drogba, so you either have to follow suit just to keep up, or you gamble on picking someone else and breaking away from the pack. Chelsea visit Aston Villa in the late game on Saturday, so it’s up to you whether you back Drogba in that game.

3. Matthew Etherington, midfielder, Stoke – 4 assists
The ex-Tottenham winger was in form before the international break, with an assist in each of his last two games for Stoke. Etherington wasn’t picked for England (though Potters might say he should have) which might means he’s well rested and ready to register another assist when Stoke travel to Bolton.

After that top three, there are eight players tied for fourth place with three assists each. Both Wayne Rooney and Fernando Torres have three assists and one goal each. It’s hard to back Rooney, so you may have more luck with his fellow three-assist-man Paul Scholes (though obviously Nani is even better) but latest news has Fernando Torres fit to play for Liverpool vs Everton in the Merseyside derby on Sunday. Arsenal’s Cesc Fabregas also has three and is always a fantasy football fave, but there’s no guarantee he’ll be fit to face Birmingham. Andrei Arshavin has the same number of assists and is more likely to play.

Other players with a trio of assists include young Aston Villa winger Marc Albrighton, who will be dribbling at Ashley Cole this weekend, Birmingham’s Sebastian Larsson, though his three assist came in the first two weeks, and West Brom’s Chris Brunt, whose three assists came in the last three weeks.