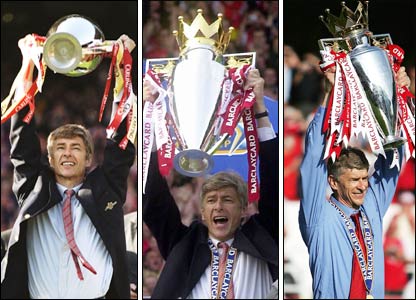 The 2018-19 English Premier League campaign has gone down in history as the most exciting season so far after Manchester City pipped Liverpool to the title by just a point.

The Etihad Stadium outfit finished with 98 points, while the Red’s 97 points were only good enough for second-place.

97 points would have been enough to win Liverpool the title in 25 different campaigns, and former Tottenham Hotspur striker Gary Lineker has aimed a thinly-veiled dig at Arsenal’s “invincible” 2003-04 season.

The Gunners won the title in style without a loss in 38 league games, winning 26 games and drawing the remaining 12.

Arsenal finished the campaign with 90 points – 11 more than runners-up Chelsea – but Lineker has offered a gentle reminder to the North London giants side that though it was an amazing achievement, it would only have been good enough for 3rd place this season, some 8 points behind the winners.

Amazing achievement, which remarkably would only be good enough for 3rd place this season, some 8 points behind the winners. https://t.co/pdKcI7Ty5u

They’re just facts, Amy. It’s no insult to be inferior to these 2 sides. ?

Arsene Wenger led his side to what has gone down in history as an incredible achievement, and that no side is yet to match their unbeaten run in the Premier League era is testament to how difficult it is to repeat such a feat.

Understandably, Lineker – a former Spurs star – won’t let any chance to taunt the Gunners pass by, but until a team win the top-flight title without a defeat, the invincible Arsenal side remain arguably the greatest in the Premier League era.